Parents of many faiths including Christians and Muslims, and others have united to protest the graphic sexual education program which was written by a child pornography producer. It is being forced on students from elementary school to highschool. In fact, this issue has touched the hearts of so many parents across so many religions that many have pulled out their children from school.

Parents have organized rallies in various parts of the province of Ontario with thousands in attendance. In fact, parents and students have even organized strikes against this new program.
JOIN http://parentsstrike.com/join/
In a massive initiative by Parents, students and educators 2 Facebook Pages have been created:
LIKE https://www.facebook.com/parentsstrike
LIKE https://www.facebook.com/pages/Parents-Against-Ontario-Sex-Ed-Curriculum/1620174608211662
There will be 2 upcoming events in Ottawa on Fri. June 5 from 10am-12pm in front of MPPs offices and from 1pm-3pm at Parliament Hill in Ottawa with parents and students from many faiths. 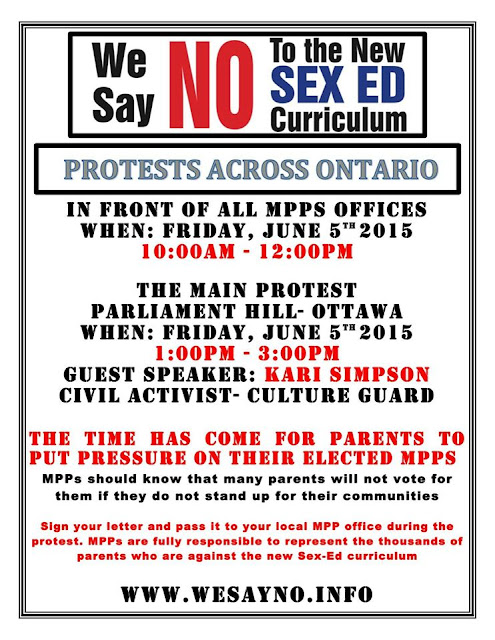 One event in Toronto on June 7 from 2pm -7pm in Queen's Park: