RIP Mons. Augustine Hoey - Catholic Priest and Convert from Anglicanism who was a Renowned Confessor - Age 101 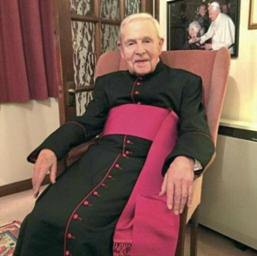 Fr Augustine Hoey who was a Catholic Priest of the Diocese of Westminster has died at the age of 101. He was also a renowned preacher and spiritual director. Fr Hoey spent much of his life as an Anglican and a member of the Community of the Resurrection, living and working in the house of the Community in Mirfield, South Africa., Manchester, Sunderland and London. He was renowned during his time as a Mirfield Father for leading parish missions and schools of prayer and for his preaching, hearing confessions and giving spiritual direction. He was received into the Catholic Church by Cardinal Hume in the early 1990s, leaving CR at the same time and becoming an Oblate of the Order of St Benedict. Fr Hoey was very active as a Catholic Priest, hearing confessions, offering spiritual direction, celebrating the daily Mass and praying.
In Walsingham, where he went to live at the age of 97, he said, “Well, I just carry on much as I always have done,” he tells me when I ask about his routine, as if, at pushing 100, nothing could be more natural. “I am on a sevenfold Office, so I get up at 4.30am for the Office of Readings at 5 am and continue from there, ending with Compline back at my house at 8 pm.” He always prayed for unity, saying " I believe that Our Lady weeps at these divisions. So I pray in each of them daily for Christian unity.” Mgr Hoey was appointed a Chaplain to His Holiness by Pope Francis.  Mgr Hoey’s published a memoir, Trembling on the Edge of Eternity (published by St Michael’s Abbey Press). He has spent most of his life as an Anglican priest and monk of the Community of the Resurrection. He converted to Catholicism and left his community at the age of 79.. He was ordained as a Catholic priest and became an Oblate of St Benedict at the suggestion of Cardinal Basil Hume, who later asked him to assist at Westminster Cathedral, which he loved. (“I have him to thank for everything,” he says.) Mgr Hoey was a well known as a confessor. People flocked to him from great distances for counsel and absolution. He has never been healthy and very nearly died from pneumonia at the age of three. He narrowly escaped violent death, too, on several occasions. He recalls the time that his East End clergy house took a direct hit during the Second World War when he was giving instruction for Confirmation and the occasion, years later, when he was preaching in a packed church in a colliery town in South Yorkshire and a vast coping stone fell from a pillar, missing his head by inches. He talks about his time in South Africa where his community sent him in the late 1950s during the worst days of apartheid (“The Africans had so much to teach us Europeans,” he says. “Tranquility, how to be still… no sense of time, except for the sun.”)
Bio Edited from Catholic Herald and Mons. Hoey FB Page