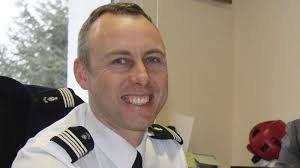 Arnaud Beltrame is a French policeman who swapped with a hostage. Lt-Col Beltrame suffered fatal injuries after volunteering to trade places with a female hostage. The French police officer died saving the lives of hostages in a supermarket siege by an Islamist gunman on Friday. Lt-Col Arnaud Beltrame, 44, was shot and stabbed after he traded places with one of the captives following a shooting spree in southern France. "He gave his life for strangers. He must have known that he didn't really have a chance. If that doesn't make him a hero, I don't know what would," Col Arnaud's brother Cedric told a French radio station on Saturday.  "Even though we were surprised and shocked when we heard what happened we were not surprised in the sense that that's the thing he would do without hesitation," Ms Nicolic (Arnaud's cousin) said. French President Emmanuel Macron also paid tribute to the officer, saying that Col Arnaud "fell as a hero" after showing "exceptional courage and selflessness", adding that he deserved "the respect and admiration of the whole nation".His actions helped bring an end to the siege that left three people dead. The radical Islamist gunman, 25-year-old Redouane Lakdim, was eventually shot and killed by police. Sixteen people were injured, two seriously, in what Mr Macron called an act of "Islamist terrorism". Lakdim was said to have demanded the release of Salah Abdeslam, the most important surviving suspect in the 13 November 2015 attacks in Paris, which killed 130 people. Col Beltrame was a highly-regarded member of the Gendarmerie Nationale and was described by France's president on Saturday as someone who "fought until the end and never gave up". It was in the Medieval town of Carcassonne, where Lakdim began his deadly shooting spree on Friday.  The violence began on Friday morning in Carcassonne, where Lakdim hijacked a car. He killed a passenger - whose body was later found hidden in a bush - and injured the driver. He then shot at a group of policemen who were out jogging, wounding one of them. Edited from BBC
Update:
In an interview with Famille Chrétienne, Father Dominique Arz, national chaplain of the gendarmerie, said:

“It turns out that the lieutenant-colonel was a practicing Catholic. The fact is that he did not hide his faith, and that he radiated it, he bore witness to it. We can say that his act of self-offering is consistent with what he believed. He served his country to the very end, and bore witness to his faith to the very end.”
Posted by Jesus Caritas Est at 11:58 AM