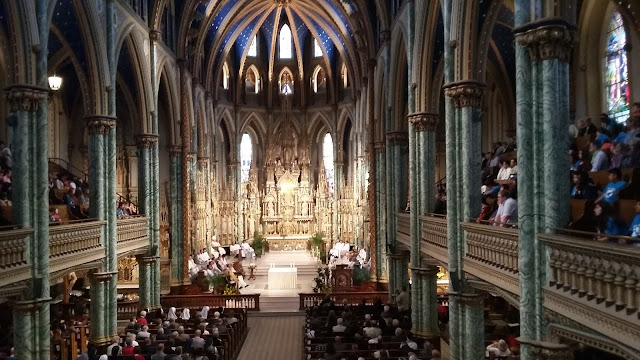 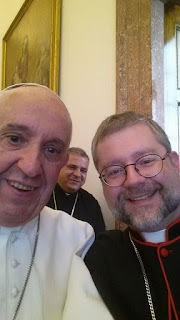 The Annual Canadian March for Life in Canada was held on Thursday, May 10, 2018 in the nation's capital of Ottawa. This year's March brought about 10,000-15,000 people according to organizer Jim Hughes. Several smaller marches are also held throughout the country. Every year several Masses are held throughout the city to accomodate the large number of Catholics gathered. This year's main Mass at the Cathedral of Notre Dame was filled with many youth and various clergy and religious. The main presider was Archbishop Prendergast of Ottawa; with him were several other Bishops and clergy. At the Basilica, St. Patrick's Cardinal Collins presided to another packed Church. The Bilingual Mass at Notre Dame received a touching homily by Auxiliary Bishop Thomas Dowd (pic left with Pope Francis) of Montreal. Bishop Dowd related the story of his beloved 94 year old father who recently died. He then related how his sister gave birth to her daughter several weeks prematurely. Despite pressure to abort she gave birth and now their daughter is a beautiful testimony to their choice for life. His sister brought forward the baby to the front of the Cathedral. He also told the story of his brother who was diagnosed with ALS and is struggling with a family of three children. But he noted how the community has come together to support him despite his illness.  He encouraged the crowd that "Life is Precious" whether at 94 years old or a baby. The choir, directed by Miriam Westen, was composed of many youth (and adults) coming from all parts of Canada to sing at the March for Life. (pic below) They sang, Ave Verum by Mozart, O Jesu King by Thomas Tallis and  a very special Pro-Life Hymn entitled "O Lord, the Giver of all Life" which is set to the tune of "O God our Help in Ages Past". This hymn was written by Mr. Cal Shenk and was released by the Priests for Life.  The full lyrics are below and are free to use in parishes.
SEE ALSO: #BreakingNews over 10,000 at March for Life in Canada's Capital with many #ProLife Youth
http://www.catholicnewsworld.com/2018/05/breakingnews-over-10000-at-march-for.html
A Pro-life Hymn


O Lord, the Giver of all life
O Lord, the Giver of all life
Whose ways are ever just,
Your people lift their hearts to you
In praise and prayer and trust.
Protect the lives of those unborn;
Let laws reflect your will;
Give us your strength to work for life,
That man may cease to kill.
Help us to know your will for us;
Give courage for the fight.
Dismiss our doubts; renew our hearts
To struggle for the right.
O Mother of the Crucified,
Who bore the Lord of life,
For ev’ry mother intercede;
Be with us in our strife.
Lord Christ, to whom each soul is dear,
For whom each child has worth,
Receive your children who have died
Before their time of birth.
Blest Trinity, O living God,
To you our prayers ascend:
Bring all at last to dwell with you

Where life shall never end. 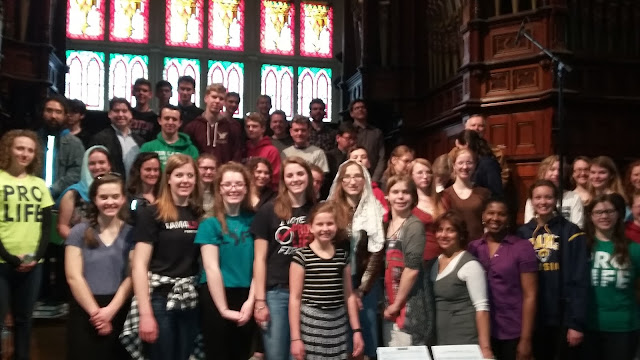