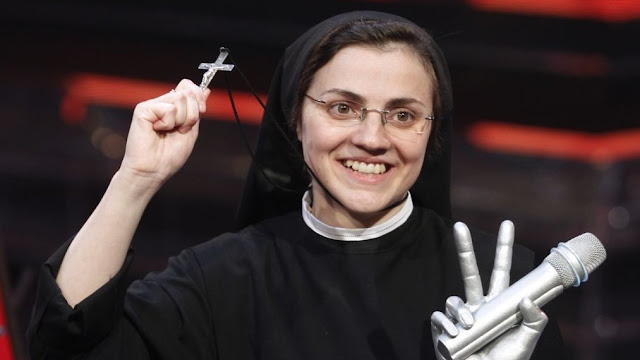 Sister Christina, famous when she won "The Voice" of Italy in 2014, has released her second album. The Italian Ursuline Sister Cristina has the album “Felice” this spring 2018.
She worked in a novitiate for two years in Brazil, which led to her calling to both music and religious life.
Rome Reports quoted SR. CRISTINASinger, “Felice” “When I entered the congregation I did not want to sing any more, because I had always conceived singing as a type of show, as something not compatible with consecrated life. But in Brazil, I found it quite different. The Lord gave me this gift and even other nuns and priests sang. So I thought, maybe it's a waste if I do not really use singing as a gift for others.”
“It's fundamental that I am in front of Jesus and I pray a lot, because if not, I cannot give anything when I meet other people. It's a different type of consecrated life.”
“This album was a chance to finally say something of my own, because the other one was a cover album, but this is an original album, so I was able to really say something. I wanted to write as much as possible about a colorful world in contrast to the world full of hate with the sadness, violence, and wrong addictions.”
Sister Christina now travels with other sisters, meeting people and performing concerts. For her, even while away from the convent, being with the sisters helps maintain “sense of normalcy” and her prayer life.
Sr. Cristina says her new album reflects her happy interior life and reflecting her “found true love in Christ.”
Sr. Cristina explained that many people have written her, explaining that her music has even helped save some of their lives. She gives credit as owed to God, who organized everything for her to be in this role.
Posted by Jesus Caritas Est at 6:23 PM