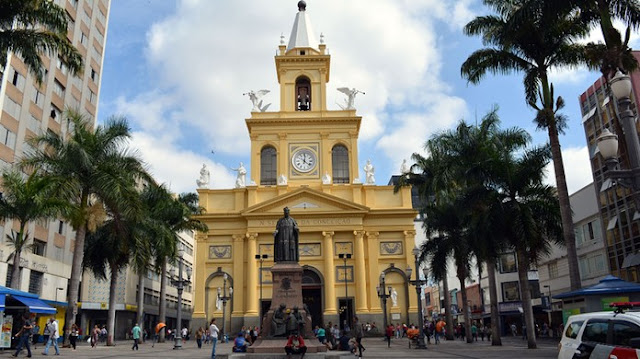 Man kills four and commits suicide during mass in the Cathedral of Campinas
Suspect fired on believers inside church in the central region on the afternoon of Tuesday (11), according to Samu and Fire Department. Four were injured after a crime.

Shooter kills four in the Cathedral of Campinas (SP) and kills himself.

A man killed four people and left four injured during a mass in the Metropolitan Cathedral, in central Campinas (SP), on the afternoon of Tuesday (11), according to the Samu, Fire Brigade and Military Police. The suspect in the shots at the church committed suicide next.

According to the Fire Department, the suspect would have entered the Cathedral with a pistol and a .38 caliber revolver, and if he had been killed in front of the altar after the crimes. He was identified by the Civil Police as Euler Fernando Grandolpho, 49, with (CNH) registered in Valinhos (SP).

The PM even said that the shooter had killed five people. Among the dead are: Sidnei Vitor Monteiro, 39, José Eudes Gonzaga Ferreira, 68, Cristofer Gonçalves dos Santos, 38, and Elpídio Alves Coutinho, 67.

As Mass had begun at 12.15; a man entered the Cathedral at about 1 o'clock; and he sat on one of the pews of the church. At the end of the celebration, he fired about 20 shots; and he killed four men: Sidney Vitor Monteiro, Jose Eudes Gonzaga, Cristofer Gonçalves dos Santos and Elpídio Alves Coutinho; and committed suicide. Four people were shot and injured;
The motivation of the crime is investigated by the police; The wounded were taken to Mário Gatti, Beneficência Portuguesa and HC of Unicamp;
The gunman was identified as Euler Fernando Grandolpho, 49 - he even worked as a prosecutor in the prosecutor's office, but left the agency in 2014
According to the Civil Police, the shooter had been treated for depression, was a recluse, lived with his parents, had a "strange profile" and had no criminal record.

The First District Police Commissioner, Hamilton Caviola Filho, saw images of the security circuit inside the church at the time of the action. He estimates at least 20 shots were fired.
Source: https://g1.globo.com/sp/campinas-regiao/noticia/2018/12/11/tiroteio-deixa-feridos-na-praca-da-catedral-no-centro-de-campinas.ghtml
Posted by Jesus Caritas Est at 9:47 PM