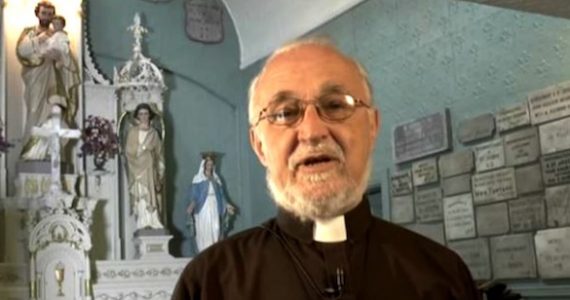 The rector at St. Joseph’s Oratory in Montreal was stabbed as he said mass in the church.

Footage from the 8:30 a.m. mass on Friday, March 22, 2019 was broadcast on a Catholic television network, showing a man dressed in dark clothing walking toward the altar. The man rushed toward Father Claude Grou, striking him at least twice with an object in his right hand.
The suspect did not resist when he was subdued by security guards.
Police spokesperson Caroline Chèvrefils said the 26-year-old suspect is known to police.
Fr. Grou, age 77, was taken to hospital. Grou, who is a member of the Congregation of the Holy Cross, has been at the Oratory since the early 2000s.
The Oratory in Montreal is visited by more than 2 million people every year.
The Oratory is the largest church dedicated to St. Joseph in the world and the largest church in Canada.

The Archbishop of Montreal, Christian Lépine, issued a statement on the website

“We are all shocked by this act of violence that has taken place in our city, in a space dedicated to peace,” the archbishop’s message said.

“We know that places of worship of many religions are targets of acts of violence. We must continue to follow the path of peace and love, believing that good will overcome evil through prayer and good works. … I would especially like to recognize the first responders, especially those who courageously protected Father Grou. I thank the police force for their timely response, the ambulance technicians for their diligence and the support staff for their courage.”

Montreal Mayor Valérie Plante reacted to the attack on Twitter, saying, “What a horrible and inexcusable gesture that has no place in Montreal. I am relieved to learn that Father Claude Grou … is out of danger and in stable condition. In the name of all Montrealers, I wish him a speedy recovery.”

What nationality was the attacker
.

I believe it does not matter... Don't you see the devils plot... Got this man to stab the priest and now gathering everyone and planting the seed of hatred.Let us all pray for him so the Father in Heaven forgives him and while at it please ask Our Father for your own needs too... Cheers

Praying for the injured priest and for our Heavenly Father to be with him and to heal him and restore him to full health so he may continue to serve God and the faithful in his church. God never sleeps nor slumbers and in His Word...vengeance is mine saith the Lord. This man is facing the wrath of God for the injuries he inflicted upon this devout priest. Amen