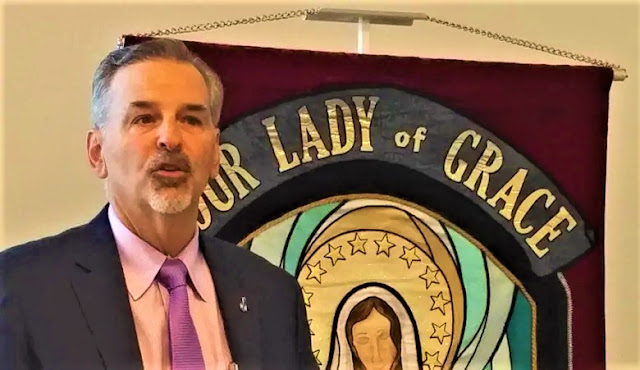 At the "Fellowship of Catholic Scholars" Conference in October, 2018, Mr. Gary Strother gave a powerful talk on pedagogy in a post-Christian society. The entire talk is shown in the video below. He noted the current challenges of today's society. He emphasized the importance of the teachers' living their faith. He explained a key is to show the beauty of the Catholic faith. Mr. Strother explained, "We see the face of God in every child that we see." In his description of his district he said, "Faith is permeated into all that we do." Strother showed a video clip on the history of the Catholic school system from CBC and a clip from Bishop Robert Barron on the beauty of the faith.

Biography:
Strother has been the chief superintendent of the Calgary Catholic School District since 2012. He leads the largest Catholic school district in Alberta, serving more than 55,000 students in 112 schools in Calgary, Airdrie, Cochrane, Chestermere and Rocky View County. Strother moved from Montreal to Calgary in 1983 when he began working with the district as a teacher, then served as a vice-principal, principal and area superintendent. Strother is committed to academic success and doing what is best for students. He believes in supporting each and every employee in the district to inspire excellence in students, which has helped make the district one of the top performers in the province. He has built a culture of shared responsibility, transparency and collaboration. Strother sits on various local and provincial boards, including the Board of Directors for the Sheldon Kennedy Child Advocacy Centre, where he recently helped unveil a toolkit to better equip teachers to identify and report child abuse.