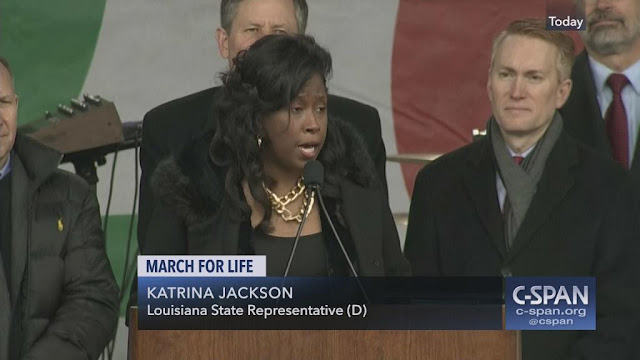 
Louisiana voters will have the opportunity to amend their state constitution to ensure no activist judges find a “right” to abortion in the state.

On Wednesday, the Louisiana legislature passed the Love Life Amendment, a state constitutional amendment that will be on the ballot in November 2020, The Advocate reports.

The measure would add language to the Louisiana Constitution stating that there is no right to an abortion or taxpayer funding for abortions. The bill had to pass the state legislature by a two-thirds majority, and voters must approve it before it can be added.

Its sponsor is state Rep. Katrina Jackson, a pro-life Democrat who spoke at the March for Life in January. (pictured above)

On Tuesday, lawmakers amended the measure to change the voting date from October 2019 to November 2020. According to the report, Jackson said she was in favor of the move because presidential elections tend to have a higher voter turnout.

“This bill still gives people the right to choose whether or not the Louisiana Constitution provides a right to abortion,” Jackson said. “I definitely don’t think the pro-lifers in this chamber want to kill the bill.”

Benjamin Clapper, executive director of Louisiana Right to Life, said the measure is necessary to protect unborn babies from death by abortion on demand.

“The Supreme Courts of 12 other states (as recently as 2018 in Iowa) have found a right to abortion in their state constitutions, striking down common-sense pro-life laws in the short term and ensuring abortion-on-demand in their states even if Roe v. Wade is overturned,” he said. “We cannot let that happen in Louisiana. By passing the Love Life Amendment we can place our pro-life values of respecting every human life at the heart of our state.”

In February, a poll of Louisiana voters found that 70 percent consider themselves to be pro-life. In addition, 71 percent said taxpayer funds should not be used for abortions.

“This amendment makes sure there is no right to abortion or taxpayer funding of abortion in our state constitution,” Jackson said when she introduced the bill.
Edited from Life News - Image source: Google Images - Screenshot C-Span
Posted by Jesus Caritas Est at 8:42 PM