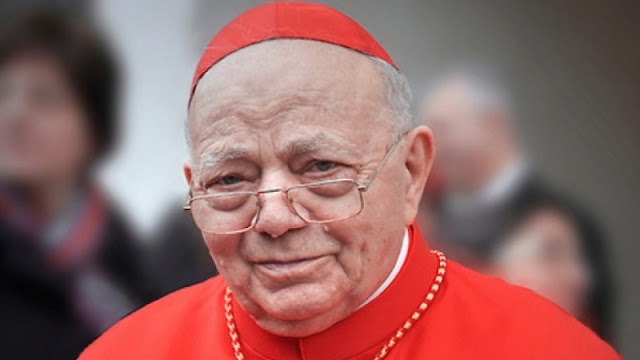 Vatican News report: Pope sends condolences upon death of Cardinal Sgreccia
Pope Francis sends his condolences for the passing of Cardinal Elio Sgreccia, who died on Wednesday at the age of 90.
By Devin Watkins

Cardinal Sgreccia served in various capacities at the Pontifical Council for the Family and as the President of the Pontifical Academy for Life from 2005 until his retirement in 2008.

He was widely-regarded an expert in the field of bioethics.

In a telegram sent on Thursday to the late Cardinal’s niece, Professor Palma Sgreccia, Pope Francis recalled Cardinal Sgreccia’s “generous service to the Church, especially his precious and diligent efforts in defense of the fundamental value of human life”.

The late Cardinal, he said, advanced its inherent dignity through study, formation, and evangelization.

“I extend my fervent prayers of suffrage so that the Lord… may welcome this zealous servant of the Gospel into His joy and eternal peace,” said Pope Francis.

With Cardinal Sgreccia’s death, the College of Cardinals consists of 220 members: 120 Cardinal electors and 100 non-electors.

Funeral services will be held in St. Peter’s Basilica on Friday, 7 June. Cardinal Re will celebrate the liturgy, and Pope Francis will preside over the Ultima Commendatio and Valedictio rites.

Forced to wait until the end of World War II to enter the seminary, he was ordained a priest on 29 June 1952. He first worked as chaplain to Catholic Action youth groups and as vice-rector of his former seminary.

In 1972, on account of his Bishop’s decision to offer pastoral ministry to the faculty of medicine in the Roman University of the Sacred Heart, he began to be a point of reference for the college community in the field of ethics and medicine, eventually serving as director of the bioethics institute at the faculty of medicine and surgery. From 1990 to 2006 he was a member of the Italian National Bioethics Committee.

On 5 November 1992, he was appointed titular Bishop of Zama Minor and secretary of the Pontifical Council for the Family. He was ordained on 6 January 1993.

On 1 June 1994 he was transferred to the Pontifical Academy for Life as vice-president and on 3 January 2005 he became president until 17 June 2008.

He is the author of the "Manuale di Bioetica", and many other publications on health pastoral care, medical ethics and the family.

Pope Benedict XVI created him Cardinal in the consistory of 20 November 2010, as the Cardinal Deacon of Sant’Angelo in Pescheria.

Appointed by Pope Francis, he participated in the III Extraordinary General Assembly of the Synod of Bishops (October 2014) on The Pastoral Challenges of the Family in the Context of Evangelization and in the XIV Ordinary General Assembly on The Vocation and Mission of the Family in the Church and Contemporary World (October 2015).

Cardinal Sgreccia died as an Honorary Member of the Pontifical Academy for Life.
FULL TEXT Source: VaticanNews.va
Posted by Jesus Caritas Est at 8:05 AM