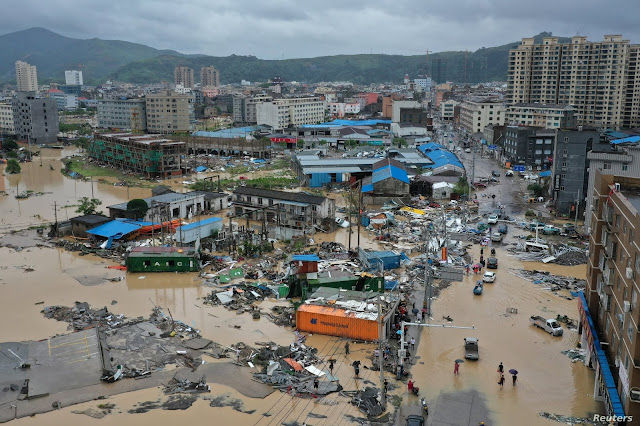 Zhejiang, Shandong, Anhui: Typhoon Lekima leaves 49 dead and 21 missing
by Wang Zhicheng
Lekima is the ninth typhoon in 2019, and the strongest to date.  The torrential rains - up to 732 mm - causes rivers to overflow, which flooded entire counties.  Damage to agriculture, homes, communications.

Beijing (AsiaNews) - At least 49 people are dead and 21 missing in the aftermath of the passage of typhoon Lekima in the provinces of Zhejiang, Shandong and Anhui, as well as numerous flooded areas and destroyed crops.

The ninth and strongest typhoon this year hit the city of Wenling (Zhejiang) on ​​the night between August 10 and 11.  Moving northward, it hit Shandong on the evening of August 11, particularly the Qingdao coast.

The torrential rains - up to a maximum of 732mm - have brought the water level of many rivers to guard levels and most of them have overflowed flooding entire counties.

In Shanzhao (Yongjia County, Zhejiang), a landslide blocked the course of the river, raising the water by 10 meters in a few minutes.  The collapse of a barrier flooded the entire village: yesterday morning, 27 bodies alone were recovered in Yongjia.

In Zhejiang, the typhoon has affected about 7 million people, of which 1.2 million have been evacuated.  At least 234 hectares of crops were damaged, with an economic loss of at least 24.22 billion yuan (3.06 billion euros).

In Shandong, five people died and seven are missing;  over 1.66 million people were affected and 183 thousand were evacuated by yesterday morning.  Also here 175 thousand hectares of crops have been destroyed.  In addition to the economic damage in agriculture, at least 609 houses have been destroyed.  More than 18,000 greenhouses for vegetable production were flooded.

In Anhui, there are four victims and five others missing.  The typhoon hit 130,000 residents of the province and at least 20,000 were evacuated, while the floods damaged houses, roads, crops, eliminating electricity and communications.

About 6 thousand hectares of crops are damaged, 364 houses are destroyed.  The provincial emergency department speaks of 437 million yuan of economic damage (59.41 million euros).

Moving towards the north, the typhoon also hit part of Liaoning, where more than 106 thousand people had to be relocated to safer areas.
FULL TEXT from Asia News IT
Posted by Jesus Caritas Est at 9:46 AM