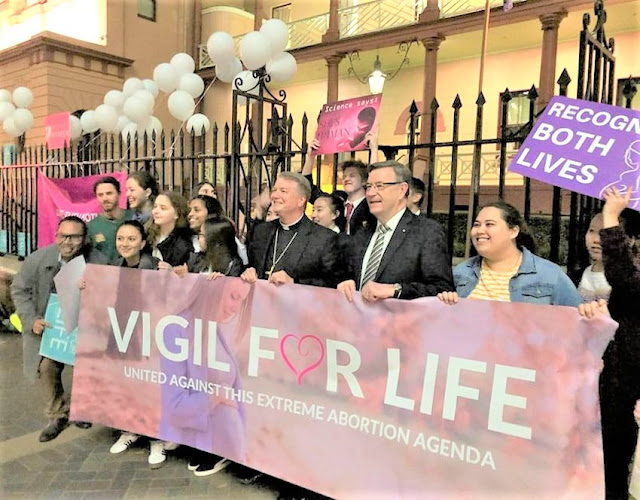 Joining him on 14 August were Bishop Daniels, head of the Coptic Orthodox Church of Australia and Rabbi Nochum Schapiro, president of the Rabbinical Council of Australia.

Also appearing before the inquiry to speak against the Reproductive Health Care Reform Bill 2019 were the Anglican Archbishop of Sydney Glenn Davies, the Rev Joseph Azize of the Maronite Eparchy of Australia and pro-life groups including Right to Life NSW, the Australian Family Association, and Women and Babies Support (WOMBS) International.

Archbishop Fisher, who also lodged a 16-page formal submission to the inquiry co-signed by all the NSW Catholic bishops, said he believed the bill should be rejected outright, and if that was not possible that it should at least be substantially improved, for example to protect medical professionals with a conscientious objection.

“The reason [abortion] is in the Criminal Act is because it goes to the heart of the very origins of human life as well as providing protection for the mother,” he said.

“THE REALITY IS THAT THESE ARE NOT LAWS USED AGAINST WOMEN WHO ARE IN DESPERATE SITUATIONS.”

The archbishop argued that the way the bill was introduced and rushed through the assembly, and inquiry by the council curtailed with almost no opportunity for community engagement, “will only add to cynicism about government today”.

“It has made it very difficult for this state’s 1.8 million Catholics to make their views known to their elected representatives,” he said before raising concerns including the bill’s allowance for unlimited abortion up to 22 weeks and late-term abortion, including sex-selection abortion, up to birth.

“This bill trivialises human life and provides unsupported pregnant women, who often feel they have ‘no other option’ than abortion, with no alternatives, no support,” he said.

“Surely we can do better by the women and babies of this state.”

Thousands of people have lodged submissions to the upper house committee since last Friday, with the archbishop noting that the parliament’s lodgement webpage crashed shortly before the 5pm deadline on 13 August.

The bill allows terminations up to 22 weeks, and after that if two doctors considering all the “circumstances” agree an abortion should occur.

Archbishop Fisher has called all who support the sanctity of human life to a rally at Macquarie Street, Martin Place from 6pm on 20 August, saying it is “critical” to continue to pray and put pressure on upper house MPs to defend life and reject the bill.

“This bill has been rushed through with minimal time for public scrutiny,” he said in a social media message. “I encourage you to voice your opposition. Together we can act to defend the sanctity of life and prevent abortion being made legal up to birth in our state.”

The committee is due to report its findings on 20 August. The bill will then be debated in the upper house before a vote.
FULL TEXT Source: The Catholicweekly of Australia
Posted by Jesus Caritas Est at 8:28 AM