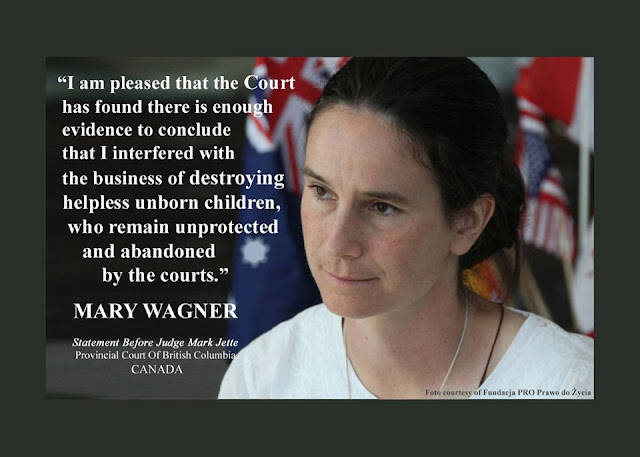 Canadian Pro-Life activist Mary Wagner was released from jail. She enters abortion clinics and gives roses to the expectant mothers. Mary has spent many years in jail for her pro-life actions. Her statement to the Court this morning: "This conviction is nothing I am ashamed of. On the contrary, I am pleased that the court has found there is enough evidence to conclude that I interfered with the business of destroying helpless unborn children, who remain unprotected and abandoned by the courts."
The BC Catholic Reports:

The judge found Wagner guilty of mischief  and trespassing at Everywoman’s Health Centre in Vancouver April 17. (The arresting police officer had been unfamiliar with B.C.’s “bubble zone” law and so she was charged with different offences than she typically is.) She’d been locked up since that day, and so, having spent more time behind bars than the maximum sentence for her crime, was set free the same day she was sentenced.
“You are not the sort of person we usually deal with in the courts,” Jette said during the proceedings.
Wagner isn’t mired in fraud or drug trafficking or other crimes many accused people who enter the provincial court are mixed up in. She is a pro-life woman with convictions that run so deep she enters abortion clinics with the urgency of someone who has learned a human life is in danger and dashes in to see if she can save it.
Though the judge found her guilty under Canadian law, he recognized Wagner’s actions come from her heart. When the Crown attorney asked for 30 hours of community service and a three-year probation, the judge gave her two years of probation and said he saw no reason for her to do community service.
“I’m satisfied that you are somebody who gives back to the community on a daily basis,” he told Wagner. “It’s in your DNA.”
That was an extraordinary statement indeed, her lawyer Peter Boushy told me afterward. “You rarely hear a judge compliment an accused person.”
Source: Mary Wagner FB page and https://bccatholic.ca/
Posted by Jesus Caritas Est at 8:09 AM