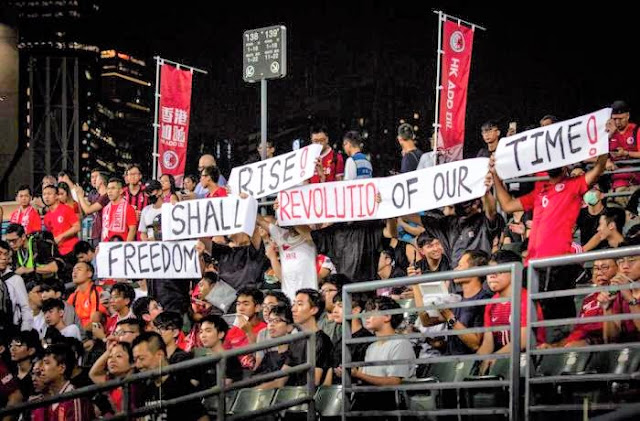 "Glory to Hong Kong", the new protest anthem (Video)
Asia News IT reports that the protesters gathered in several shopping centers and sang the new song. Chinese anthem drowned out in Stadium.

Hong Kong (AsiaNews) - The anti-extradition movement protests have a new anthem: "Gloria a Hong Kong" (see video). Yesterday evening, in various shopping centers in the area, in Ma On Shan, Wong Tai Sin, Mong Kok and others , hundreds of protesters gathered to sing the song.

"Glory to Hong Kong" was composed by a local musician, at the request of young people who asked for a song that would communicate the unity and courage of their actions. The text and music have resulted in great successes on social media.

In these months the movement has also used other songs. Among these, "Sing halleluja to the Lord", a Christian chant, for the chance to gather without the police permission: religious gatherings do not need it. Another very famous song is "Do you hear the people sing", taken from the musical of the "Les Miserables".

Many young people would like "Glory to Hong Kong" to become the official national anthem. Yesterday, during a football match between Hong Kong and Iran, many spectators disturbed the Chinese official anthem and sang the new anthem . Full Text Source: AsiaNewsIT
Posted by Jesus Caritas Est at 10:48 AM