#BreakingNews St. Mary's Catholic Church set on Fire - Priest says it was “Miraculous” that it didn't Burn down and Prays for Arsonist 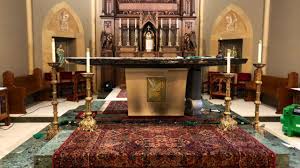 The main altar of St. Mary Parish in St. Clair sustained significant damage after a suspect broke into the church in the early morning of Oct. 1 and lit the altar linens ablaze. St. Mary pastor Fr. Michael Zuelch said the community is praying for the apparent arsonist's conversion, calling it “miraculous” that the church itself didn't burn. (Photo courtesy of St. Mary Parish)
'Miraculous' that historic church didn't burn down, pastor says; parish prays for apparent arsonist's conversion
ST. CLAIR — In the early morning hours of Oct. 1, a man broke through a side door of St. Mary Parish in St. Clair. Surveillance video showed the man walked around the church for approximately 20 minutes with a knife in hand, taking a few dollars from the St. Vincent de Paul box.

About 2:30 a.m., he hopped the Communion rail, took a crucifix from the altar, and set the altar linens on fire. He also started a fire on a side altar with a statue of the Blessed Virgin Mary. At 6 a.m., the parish’s maintenance director entered the sanctuary to find it filled with smoke.

A crucifix that was stolen from St. Mary Church in St. Clair is pictured.

“Our church has been a pillar of the community since 1850, and no one would expect an individual to attempt to burn it down or desecrate our church,” Fr. Zuelch said in a statement to Detroit Catholic. “We are thankful and quite aware that it is miraculous for the fire not to have spread to the entire sanctuary and church.”

The main altar was on fire for more than four hours, Fr. Zuelch said.

“Roughly half of it burned, and the fire never spread to the altar stone or lit the remaining linens and altar cover on fire,” Fr. Zuelch said. “Our Blessed Mother’s altar was also set on fire and sustained little damage. The best response to the situation are the words, ‘It was the tears of Mary that put the fire out.’”

Extensive smoke damage was sustained throughout the church, which will require scrubbing and potentially repainting. Repairs and restoration could take several months. The parish had just completed a sanctuary renovation this year.

St. Clair Police Chief Timothy Raker found it strange that the suspect could have done more damage, but instead attempted to destroy the altar, leaving behind many valuable articles. His department is working with state police forensics and the Bureau of Alcohol, Tobacco, Firearms and Explosives (ATF) to investigate all credible leads.


Fr. Michael Zuelch celebrated Mass on Oct. 5 for parishioners of St. Mary Parish in a large tent on the parish grounds, which was initially set up for the parish's Fall Festival.
Edited from https://detroitcatholic.com