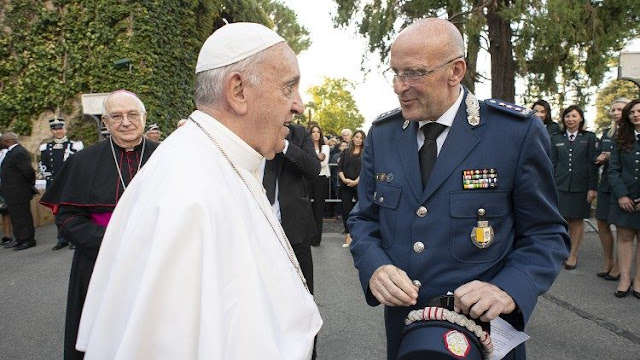 Broccoletti, who was deputy director and deputy commander under Giani, is now also the director of the Directorate for Security Services and Civil Protection of the Vatican City State.

Gianluca Gauzzi Broccoletti was born in Gubbio, Perugia on 3 June 1974, and graduated in safety engineering and protection from the “La Sapienza” University in Rome.  Married with two children, he joined the Gendarme Corps in 1995.  Since 1999 he has been responsible for the design and development of the infrastructure of networking technology and security of the Vatican City State and cyber security.

In 2010 he was transferred to the Operational Security Centre, gradually advancing in responsibilities and corresponding levels until he reached the rank of manager in 2017, and deputy director and deputy commander in 2018. Over the years, he has established a relationship of trust with the various special Secretariats of the Holy Father, the Supreme Authorities of the Governorate and the Secretariat of State, where competence and professionalism were required for confidential investigations.

He has accompanied the Supreme Pontiff on numerous apostolic journeys and pastoral visits in Italy and throughout the world. He also coordinated the summer stays of Saint John Paul II and Pope Benedict XVI, and served as deputy commander of the Detachment of Castel Gandolfo during the summer stay of Pope Benedict XVI in the Pontifical Villas. He was part of the staff responsible for managing technological security during the 2005 and 2013 Conclave.

He has served as delegate of the director of the Security and Civil Protection Services in various circumstances for meetings with the City of Rome and the various police forces relating to so-called “major events” when the presence of the Holy Father is expected. He has attended numerous courses, seminars and internships with the various Italian and international police forces.
Full Text Source: VaticanNews.va - Images Source: Ilfogliettone.it - Google Images
Posted by Jesus Caritas Est at 11:11 AM