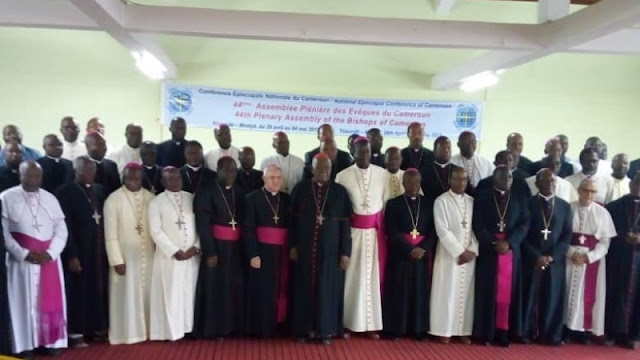 YAOUNDÉ, DECEMBER 13, 2019 (CISA)- Bishop Abraham Kome of the Catholic diocese of Bafang and the president of the Episcopal Conférence Nationale du Cameroun, (CENC)  has decried human rights violation in various sectors in the country.
“We have seen the difficulty with which political parties have to manifest. We see – and I say this with a lot of emotion – when we visit our country’s prisons, what we see there is poor infrastructure, poor treatment of inmates, and overcrowding in prison cells. When one sees that, one can only affirm, if one has to speak the truth, that human rights have deteriorated in our country,” he said.
Bishop Kome was speaking during a December 10 workshop on the state of human rights in Cameroon, days after the country’s National Commission on Human Rights and Freedoms in Cameroon published its 2018 human rights report.
The report documented arbitrary killings, forced disappearances, and a crackdown on political freedom; as well as noting the limited access to justice for aggrieved persons.
Currently, the government is fighting two major internal conflicts: The first against separatists in the country’s Anglophone regions, and the second against Boko Haram militants in the north.
The report said that in these regions, human rights have been grossly violated, both by insurgents and the military.
“The climate of insecurity degenerated into allegations of violations of the right to life and to physical and moral integrity of persons and property; violations of the right to education, health, private property and access to administrative services and to a fair trial of suspects and the deplorable detention conditions,” the report states.
It further indicated that between January and December 2018, “close to 200 civilians were killed by separatists and government soldiers in the Anglophone regions alone.”
The war that started in 2016 as a protest by Anglophone lawyers and teachers over attempts to destroy the education and common law systems practiced in English speaking regions degenerated into an armed rebellion with many English speakers demanding for outright independence.
The report denotes poor prison conditions, limited access to justice for accused persons, the torching of schools that has forced about 800,000 children out of education, as well as attempts by the government to limit access to freedom of speech and assembly.
Bishop Kome also called for revision of Cameroon’s electoral code in order to “guarantee the peoples’ human right to freely choose the leaders they want.”
“The electoral code does not guarantee the transparency and authenticity of electoral results,” the bishop said as reported by Crux.
Full Text Source: CISA News Africa