#BreakingNews 2 Guards Attacked including Woman hit by Car at Shrine of the Immaculate Conception in Washington D.C. - Video 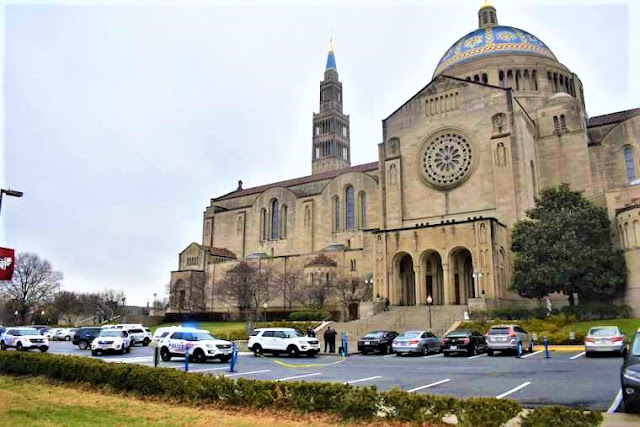 NBC reports that a Guard was Stabbed at the National Shrine in DC; and 2nd Guard Hit by a Car
Suspect has surrendered after standoff with police about 3 miles from National Shrine

Two security guards were badly injured Tuesday morning at the Basilica of the National Shrine of the Immaculate Conception in Northeast D.C., and a suspect has surrendered following a standoff with police.

Authorities believe the suspect knew both victims and that the incident may have been domestic. There was no evidence that the attack was related to the National Shrine itself.

The incident began in the parking lot of the National Shrine when a male driver pulled into the lot and struck a female guard, pinning her between his vehicle and another car, police sources said. The driver also struck several cars in the lot.

Suspect in National Shrine Attack Surrenders to Police
The suspect then got out of the car and chased a male guard into the Shrine, where he stabbed that guard multiple times.

He then went back outside, got back into his vehicle and struck the female guard a second time before fleeing, police said.

Officers received a call shortly before 9:15 a.m. Tuesday about the incident at the National Shrine, which is located in the 400 block of Michigan Avenue NE.

Both victims were rushed to a hospital in critical condition.

The suspect fled to the Brightwood neighborhood of Northwest D.C., about three miles away, where he abandoned his car and barricaded himself inside his home in the 1300 block of Sheridan Street NW. The standoff lasted about an hour before he turned himself in to police.

The suspect was injured at some point during the incident. It was not clear whether the wounds were self-inflicted or happened during the attack on the guards.

During the response, a team of heavily armed officers was called to the scene outside the house. Streets were closed within about a two-block radius.

The National Shrine released a statement saying in part, "The suspect is believed to be known to the victims." No visitors or guests were harmed, the statement said.

The Basilica of the National Shrine of the Immaculate Conception is the largest Roman Catholic church in North America and is adjacent to The Catholic University of America. Pope Francis visited in September 2015. At least six Masses are celebrated there daily.
Source: www.nbcwashington.com - Image Source: Google Images
Posted by Jesus Caritas Est at 3:03 PM