Pope Francis' Message on Day of Persons with Disabilities ".. I pray that each person may feel the paternal gaze of God, who affirms his full dignity and the unconditional value of his life...." Full Text 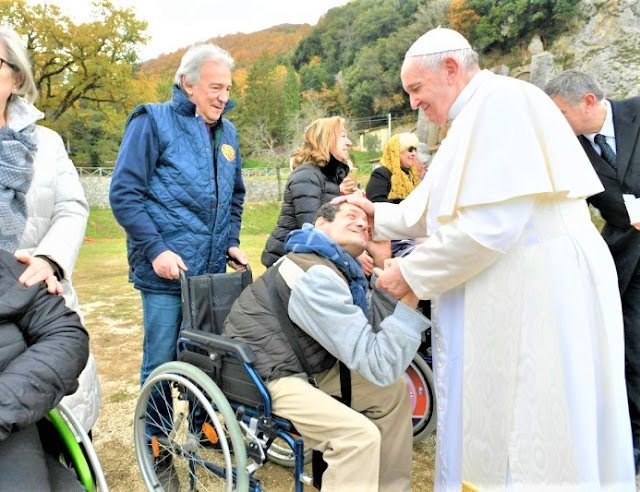 On the occasion of the International Day of Persons with Disabilities, we renew our gaze of faith, which sees in each brother and sister the presence of Christ Himself, Who considers every gesture of love towards one of His least brothers to have been made to Himself (cf. Gospel of Matthew 25: 40). On this occasion, I would like to recall how today the promotion of the right to participation plays a central role in combating discrimination and promoting the culture of encounter and quality of life.
Great progress has been made towards people with disabilities in the medical and welfare fields, but still today we see the presence of the throwaway culture, and many of them feel that they exist without belonging and without participating. All this calls not only for the rights of people with disabilities and their families to be protected, but it also exhorts us to make the world more human by removing everything that prevents them from having full citizenship, the obstacles of prejudice, and by promoting the accessibility of places and quality of life, taking into account of all the dimensions of the human being.
It is necessary to care for and accompany persons with disabilities in every condition of life, also making use of current technologies but without regarding them as absolute; with strength and tenderness, to take on board situations of marginalization; and to make way alongside them and to “anoint” them with dignity for an active participation in the civil and ecclesial community. It is a demanding, even tiring journey, which will increasingly contribute to forming consciences capable of recognizing that each one of us is a unique and unrepeatable person.
And let us not forget the many “hidden exiles”, who live within our homes, our families, our societies (cf. Angelus, 29 December 2013; Address to the Diplomatic Corps, 12 January 2015). I think of people of every age, especially the elderly who, also due to disabilities, are at times considered a burden, a “cumbersome presence”, and risk being discarded, of being denied concrete job prospects for the construction of their future.
We are called to recognize in every person with disabilities, even with complex and grave disabilities, a unique contribution to the common good through his or her own original life story. To acknowledge the dignity of each person, well aware that this does not depend on the functionality of the five senses (cf. Discussion with the participants in the Convention of the CEI on disability, 11 June 2016). This conversion is taught by the Gospel. It is necessary to develop antibodies against a culture that considers some lives to be “League A” and others “League B”: this is a social sin! To have the courage to give a voice to those who are discriminated against for their condition of disability, since unfortunately in some countries, still today, they are not recognized as persons of equal dignity, as brothers and sisters in humanity.
Indeed, making good laws and breaking down physical barriers is important, but it is not enough, if the mentality does not change, if we do not overcome a widespread culture that continues to produce inequalities, preventing people with disabilities from actively participating in ordinary life.
In recent years inclusive processes have been put in place and implemented, but this is still not enough, as prejudices generate, in addition to physical barriers, also limits to access to education for all, to employment and to participation. A person with disabilities, in order to build himself up, needs not only to exist but also to belong to a community.
I encourage all those who work with people with disabilities to continue with this important service and commitment, which determines the degree of civilization of a nation. And I pray that each person may feel the paternal gaze of God, who affirms his full dignity and the unconditional value of his life.
From the Vatican, 3 December 2019