Wow 1.3 Million People in Poland at one of the World's Largest Epiphany Parades with President and Cardinal 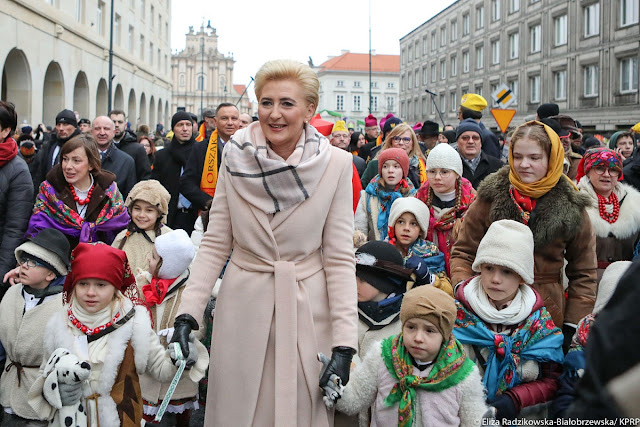 An estimated 1.3 million people took to the streets of cities across Poland on Monday in colourful parades to mark the Roman Catholic Church’s Feast of the Epiphany.
Polish President Andrzej Duda speaks during an Epiphany parade in Warsaw on Monday.
The processions featured people of all ages, singing carols and wearing paper crowns, as well as richly dressed actors portraying the three Magi from the Bible—Caspar, Melchior and Balthasar.

Warsaw Cardinal Kazimierz Nycz stood with the actors portraying the Three Wise Men during a prayer before an Epiphany parade in the Polish capital on Monday.
In the largest such event, a record crowd of some 90,000 gathered in the capital Warsaw to take part in an annual march from the city’s landmark Castle Square to the central Piłsudski Square, state news agency PAP reported, citing a spokeswoman for the organisers.

Poland’s President Andrzej Duda, who joined the Warsaw parade in the company of First Lady Agata Kornhauser-Duda, told those gathered that the annual event offered an opportunity for people “to meet and be together … as well as to sing together in the streets of our cities and towns.”

The Polish president and first lady sang carols at Warsaw's Piłsudski Square, accompanied by Roman Catholic Cardinal Kazimierz Nycz (left).
Duda added that Epiphany processions enabled Poles to “rejoice and feel a sense of community,” both in religious terms and “as a community of people who share the same values and who simply want to be together.”

First Lady Agata Kornhauser-Duda (picture above shows in centre) celebrates the Feast of the Epiphany in Warsaw on Monday. Photo: Eliza Radzikowska-Białobrzewska/KPRP
The Feast of the Epiphany, also known as Three Kings' Day, is one of the oldest and most important holidays in the Roman Catholic Church, and a public holiday in Poland.

More than 20 such events were also scheduled to be held by Polish communities abroad.