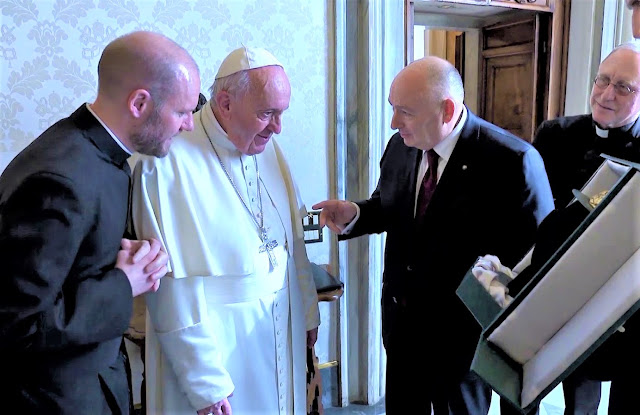 In meeting with Pope Francis at the Vatican, Dr. Moshe Kantor discussed next World Holocaust Forums to focus on ethical and moral issues.

Pope Francis held a private meeting with in the Vatican today, Dr. Moshe Kantor, President of the World Holocaust Forum Foundation and the European Jewish Congress.
“We believe strongly in the need to also focus future World Holocaust Forums on addressing the most pressing moral and ethical challenges of our time and to develop best practices which can help shape a better future for all of humanity”, Dr. Kantor said. “These are all complex issues which require deep discussion by world leaders, opinion shapers and representatives from the world of religion, morality and ethics.”

Dr. Kantor thanked the Pope for his strong commitment to preserving the memory of the Holocaust, and combatting the contemporary resurgence of anti-Semitism, and for sending a delegation led by Cardinal Koch to represent the Holy See at the Fifth World Holocaust at Yad Vashem in Jerusalem.


The Golden Vision award is the highest award of the European Jewish Congress that is bestowed annually to two personalities - one Jewish, and one non-Jewish - for their outstanding intellectual contribution to a more inclusive world where anti-Semitism is not tolerated.
Edited from Source: israelnationalnews.com
Posted by Jesus Caritas Est at 12:22 PM