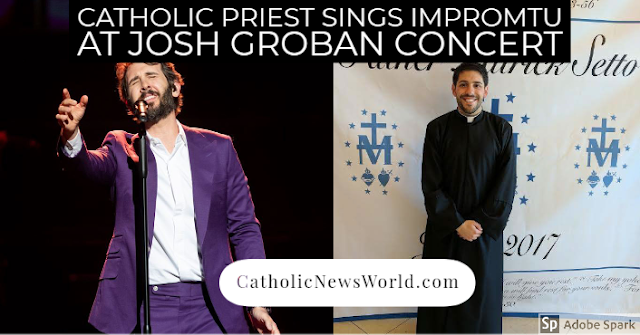 According to Caesars Windsor about 4,800 people attended the performance on Feb. 9, 2020.
Michigan resident Fr. Patrick Setto says he wasn't even sure he would be able to attend Josh Groban's Sunday concert at Caesar's Windsor.

A CBC report noted that Setto said he wanted to attend the show, a busy life got in the way for the Chaldean Catholic priest, so he put the concert to the side.

"My cousin found out that I really wanted to go, so she went ahead and bought tickets," said Fr. Setto, who also delivers sermons at Mother of God Church in Southfield, Mich. "I had no idea, she surprised me."

Fr. Setto said he prayed that he and his cousin would be able to meet Groban before the show.

"God [answered] my prayers and let me sing for him," Setto said.

Fr. Setto also  performs in a praise and worship band.

"He was listening to the crowd," said Fr. Setto. "So my cousin looks over and goes, 'Just say I want to sing with you, just scream it out.'"

Fr. Setto's performance was captured on video and uploaded to YouTube and social media, where it's gne viral.

As the footage shows, Fr. Setto's performance astonished both the audience and Groban himself.

"You just gave me a nice little break, Patrick," joked Groban, after Fr. Setto returned the mic. "When I come back here in a year, I'm going to be playing in the bar and I'm going to be seeing posters for Patrick."

An audience member later says something to Groban, who asked, "You're a Catholic priest?"

"I've always thought his personality is really down to the Earth," said Setto. "He's a simple guy, he's funny, he knows how to relate to people, and I think his music … has a spiritual message. Whether he intended that or not, the music has got an almost supernatural touch to it."
Edited from CBC.ca - Images from FB - Caesors Windsor and Fr. Patrick Setto
Posted by Jesus Caritas Est at 2:34 PM