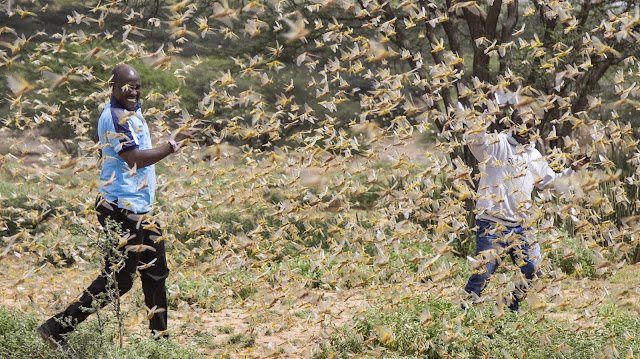 Mogadishu (Agenzia Fides) – First the drought, then the floods, now the locusts. There is no peace for Somalia. In six months, the country has been hit by three calamities that have brought down local and, mainly, southern regions’ economy. The population is exhausted: the alert has been issued to Agenzia Fides by Mgr. Giorgio Bertin, Bishop of Djibouti and Apostolic Administrator of Somalia.
Last Autumn, locusts were born and reproduced very quickly in Yemen. Thanks to the lack of a state authority able to put in place actions causing their destruction, the larvae developed and created vast swarms. From the Arabic peninsula, the swarms, thanks to the favourable climatic conditions, moved to Eastern Africa.
“From what I have seen and heard about our four missions – Mgr. Bertin explains – locusts have transited in Djibouti. They stopped there ‘to take a breath’. They provoked some damages but, in the end, not serious ones. The problem is that they moved south. They ran over the South of Ethiopia and Somalia and the North of Kenya”. “The spread of locusts is a serious fact”, the Bishop highlights. “All the nations in the Horn of Africa have put in place measures to counter their expansion. In Somalia, however, the situation is more complicated. Here, state and regional institutions exist only on paper. Authorities do not take decisions or are unable to do that because of the instability produced by the constant fighting. Who loses out are the poorest populations who can do nothing to face droughts, floods and locusts”.
The FAO, the United Nations agency "Food and Agriculture Organization", estimates that insects are about 200 billion now and that their number can increase up to 500 billion within June. “It is the worst invasion in the last 25 years in Ethiopia and Somalia, while for Kenya the last similar episode dates back to 70 years ago”, the FAO experts explain. “The severity of the locusts’ plague – continues the organisation – is amplified by the fact that it is affecting crops and pastoral lands in areas that have already been suffering from drought, flood events and also political instability”.
In 2018, in Somalia, low rainfall has caused a very strong drought that destroyed crop yields and livestock. Local communities were forced to sell their goods and borrow food and money in order to survive. More than 6 million people had to come to terms with famine and acute hunger. Moreover, during last year autumn, rainfall from monsoon reached an unprecedented violence.
Heavy rains at the end of October caused serious floods provoking casualties, more than 270 thousand displaced persons and damages to livestock. The most affected region is the Hiiraan region, where many people had to leave their houses to look for a shelter in the higher areas.
Dozens of deaths and hundreds of injuries have been registered. Now, locusts have arrived. According to FAO, in Somalia at least a million people are already under strong food insecurity and at least 2.8 million are at risk.
(EC) (Agenzia Fides 10/3/2020)
Posted by Jesus Caritas Est at 10:47 AM