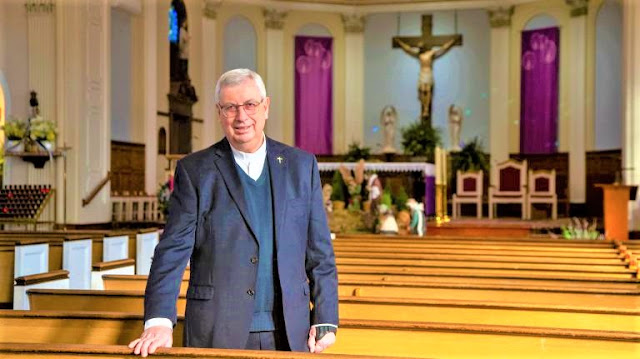 WASHINGTON—Pope Francis has appointed Rev. Luis M. Romero Fernandez, M. Id. as Auxiliary Bishop of Rockville Centre.
Bishop-elect Romero is a priest of the Institute of Christ the Redeemer (Idente Missionaries) and currently serves as Pastor of Our Lady of Loretto Parish in Hempstead, NY. The appointment was publicized today in Washington, D.C. by Archbishop Christophe Pierre, apostolic nuncio to the United States.
Father Romero was born June 16, 1954 in Palencia, Spain. He studied Philosophy and Theology at the International Seminary of Idente Missionaries in Tenerife, Spain (1974-1980). He holds graduate degrees in Biological Sciences (University of Seville, Spain, 1978), Philosophy and Letters (Autonomous University of Madrid, Spain, 1985), and a Doctoral degree in Medicine (University of Saragossa, Spain, 1987).
He entered the Idente Missionaries in 1972 and was ordained to the priesthood on September 11, 1981 in Tenerife, Spain.
Father Romero’s assignments after ordination include: Provincial Superior of Idente Missionaries in Saragossa, Spain (1981-1987), La Paz, Bolivia (1987-1996) and Santiago, Chile (1994-1997). From 1987 to 1994, Father Romero served as Director of the University Pastoral (Campus Ministry) and Religious Sciences Department of the Catholic University of Bolivia in La Paz, Bolivia. He was also Adjunct Director of the Religious Sciences Department at the Catholic University of Bolivia (1991-1994).
Father Romero served as Chaplain of the Convent of the Order of Immaculate Conception in La Paz, Bolivia (1987-1994). From 1994-1996, he was Pastor of Holy Mary of Pura Pura Parish and Dean of the Deanery of Munaypata (4 parishes) in the Archdiocese of La Paz, Bolivia; Pastor of Saint Norberto Parish, Archdiocese of Santiago, Chile (1996-1997); Pastoral Assistant (Chaplain for Campus Ministry) at the Pontifical Catholic University of Chile, Santiago (1996-1997); Chancellor and Rector-Chancellor (President) of the Private Technical University of Loja, Ecuador (1996-2009).
From 2009 to 2010, Father Romeo was part of several missions in the headquarters of Idente Missionaries Institution in Rome, Italy, and the General See of the Male Branch in Madrid, Spain. He served as Director of the University Pastoral Department (Campus Ministry) in the Diocese of Cadiz, Spain (2009-2011); Counsellor of the General See of Idente Missionaries, Men’s Branch (2009-2017). From 2011 to 2013, he served as Provincial Superior of Idente Missionaries in India (Cochin). Bishop-elect Romero has also held positions as Professor/Researcher, University of Saragosa, Spain (1978-1987), Professor/Researcher, Universidad Mayor de San Andrés, La Paz, Bolivia (1990-1996), and Professor, School of Medicine and School of Biochemistry, Private Technical University of Loja, Ecuador (1998-2008).
In 2014, Father Romero was named Pastor of Our Lady of Loretto Parish in the Diocese of Rockville Centre in Hempstead, New York. He is fluent in English and Spanish, and also has familiarity with French, Portuguese and Italian languages.
The Diocese of Rockville Centre is comprised of 1,198 square miles in the state of New York and has a total population of 3,004,366 of which 1,428,296 are Catholic. Bishop John O. Barres is the current bishop of Rockville Centre.
--- FULL TEXT Release by USCCB - US Bishops' Conference
Posted by Jesus Caritas Est at 9:37 AM