At Mass, Pope Francis says "The Lord has chosen us from the womb." and Prays for those who Suffer Unjustly in Homily - Full Video/Text 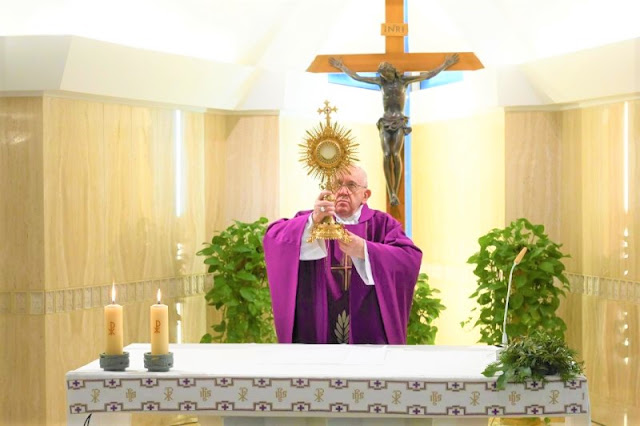 In these days of Lent we have seen the persecution that Jesus suffered and how the doctors of the Law have raged against him: he was judged under fury, with fury, being innocent. I would like to pray today for all the people who suffer an unfair sentence for fury.

The prophecy of Isaiah that we have heard is a prophecy on the Messiah, on the Redeemer, but also a prophecy on the people of Israel, on the people of God: we can say that it can be a prophecy about each of us. In essence, the prophecy emphasizes that the Lord has chosen his servant from the womb: he says it twice (cf. Is. 49,1). From the beginning his servant was elected, from birth or before birth. The people of God were elected before birth, each of us too. None of us fell into the world by chance, by accident. Everyone has a destiny, has a free destiny, the destiny of God's election. I was born with the destiny of being a son of God, of being a servant of God, with the task of serving, building, building. And this, from the womb.

The Servant of Yahweh, Jesus, served until death: it seemed a defeat, but it was the way of serving. And this underlines the way of serving that we must take in our life. To serve is to give oneself, to give oneself to others. To serve is not to demand for each of us some benefit other than serving. It is glory, to serve; and the glory of Christ is to serve until he annihilates himself, until death, death of the Cross (cf. Phil 2: 8). Jesus is the servant of Israel. The people of God are servants, and when the people of God move away from this attitude of serving, they are apostate people: they move away from the vocation that God has given them. And when each of us moves away from this vocation to serve, he moves away from the love of God. He builds his life on other loves, many times idolizing.

The Lord has chosen us from the womb. There are, in life, falls: each of us is a sinner and can fall and have fallen. Only Our Lady and Jesus [are sinless]: all the others have fallen, we are sinners. But what matters is the attitude before the God who elected me, who anointed me as a servant; it is the attitude of a sinner who is capable of asking for forgiveness, like Peter, who swears that "no, I will never deny you, Lord, never, never, never!", then, when the cock crows, he cries. Repent (cf. Mt. 26.75). This is the way of the servant: when he slips, when he falls, ask for forgiveness.

Instead, when the servant is unable to understand that he has fallen, when passion takes him in such a way that he brings him to idolatry, he opens his heart to Satan, he enters the night: this is what happened to Judah (cf. Mt . 27, 3-10).

We ask for the grace to persevere in service. Sometimes with slips, falls, but the grace at least to cry like Peter cried.

People who do not communicate can now make spiritual communion.

My Jesus, I believe that you are truly present in the Blessed Sacrament of the altar. I love you above all things and I desire you in my soul. Since I cannot receive you sacramentally now, at least spiritually come to my heart. As already come, I embrace you and I join everything with you. Don't let it ever separate me from you.
Posted by Jesus Caritas Est at 8:03 AM