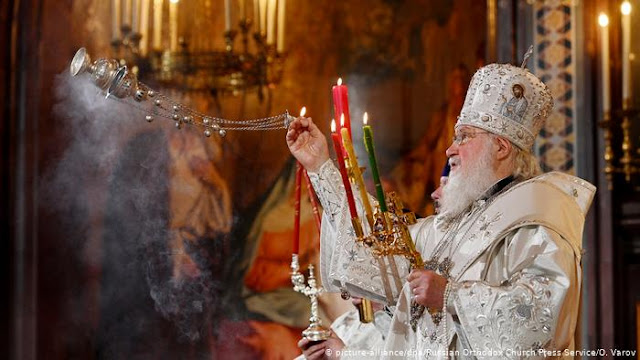 According to CBC News Orthodox Christians marked Easter amid COVID-19 restrictions in empty churches. In Egypt, Pope Tawadros II held Easter services in an empty monastery in the desert.  Eastern Christian rites marked Easter, on April 19, a week after the Western Catholic calendar. Ordinarily, the churches in the Holy Land would be filled with faithful and tourists, but travel restrictions imposed in Israel to prevent the spread of the coronavirus have prevented the arrival of pilgrims to Jerusalem for the springtime holiday and limited the gathering of worshippers at the church. Easter mass was performed by a small group of clergy at the Holy Sepulchre, the site where it is believed Jesus was entombed.
In Egypt, Pope Tawadros II, the spiritual leader of the country's Coptic Orthodox Christians, held Easter services in an empty monastery in the desert, amid coronavirus restrictions that kept congregations from gathering at churches and monasteries across the country.  The clerics were seen practicing physical distancing during the prayers. Keeping the faith during the COVID-19 pandemic — by praying at home and staying connected online Pope Francis held Divine Mercy Sunday Mass, he had called COVID-19 pandemic an 'epochal challenge' and today greeted the Oriental Christians celebrating Easter .
Russian President Vladimir Putin congratulated Christians on the Orthodox Easter in a video message on Sunday. Putin said the religious festival would strengthen Russians' hope and faith because the resurrection of Christ was a powerful symbol of rebirth and a reminder that life goes on. Russian authorities and clerics have urged Christians to stay at home during the Orthodox Easter weekend for their own safety, though a senior cleric urged police on Saturday to be lenient on those who still try to make it to church.
Globally, there are roughly 300 million Orthodox Christians, primarily living in Eastern Europe, Russia and parts of the Middle East.
However, Covid-19 does not extinguish the "Sacred Fire" rite in the Holy Sepulcher. According to Agenzia Fides, there was a prohibition to hold religious celebrations and gatherings in recent weeks by the Israeli government to curb the spread of the epidemic is also affecting the Holy Week rites of the Eastern Churches that follow the Julian Calendar, and that celebrate the Easter of the Resurrection on Sunday 19 April. But the Israeli authorities have nevertheless allowed the ceremony of the "Sacred Fire" to be held in the Holy Sepulcher, albeit in an unusual form, celebrated on the eve of Easter in the Holy Sepulcher, an event awaited by the communities of the Orthodox Churches and the ancient Eastern Churches scattered throughout the world. Usually, on the eve of Easter, thousands of Orthodox Christians gather in the Basilica built in the place where according to tradition Jesus Christ was buried and rose to participate in the pre-Easter rite: the Greek Orthodox Patriarch of Jerusalem, making his way through the crowd , enters the Edicule, the newly restored structure which, inside the Sanctuary, contains the remains of a cave venerated at least from the fourth century after Christ as the tomb of Jesus. There the Head of the Greek Orthodox Church in Jerusalem prays alone, holding a lamp powered all year round, which is turned off before the rite, and then comes out with the flame of the lamp rekindled according to tradition by the "Sacred Fire" descended from heaven. The faithful rush to light their candles. This year, at the disposal of the Israeli government, the faithful are not present at the Sacred Fire ceremony. Only ten people attended the ritual in the Holy Sepulcher, starting from 1 pm on Saturday 18 April: Greek Orthodox Patriarch Theophilos, the Armenian Orthodox Patriarch of Jerusalem Nuhran Manougian, Anba Antonius, Coptic Orthodox bishop of Jerusalem, and Archbishop Gabriel Dahho, Syrian Orthodox Patriarchal Vicar for the Holy City, together with four assistants and two Israeli policemen. After the ceremony, the flames drawn from the "Sacred Fire" will be brought with the escort of Israeli security forces to Ben Gurion airport to be loaded onto 10 empty planes bound for Russia, Ukraine, Greece, Georgia, Cyprus, Romania, Moldova , Belarus, Poland, Kazakhstan. (GV) (Edited from Agenzia Fides and CBC News)
Posted by Jesus Caritas Est at 8:47 PM