Saint April 13 : Blessed Margaret of Castello - Abandoned by her Parents due to her Disabilities - Patron of the Ugly with Novena Prayer 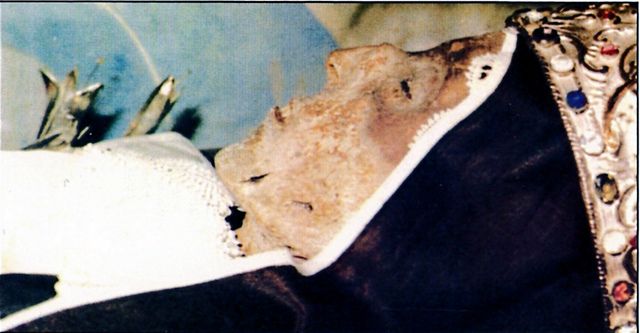 Patron of the Ugly, Unwanted, Abandoned and the Disabled.
Bl. Margaret of Castello was born in the fourteenth century in Metola, Italy to noble parents who wanted a son. When the news was brought to the new mother that her newborn daughter was a blind, hunchbacked dwarf, both parents were horrified. Little Margaret was kept in a secluded section of the family castle in the hopes that her existence would be kept secret. However, when she was about six years old, she accidentally made her presence known to a guest. Determined to keep her out of the public eye, her father had a room without a door built onto the side of the parish church and walled Margaret inside this room. Here she lived until she was sixteen, never being allowed to come out. Her food and other necessities were passed in to her through a window. Another window into the church allowed her to hear Mass and receive Holy Communion. The parish priest became a good friend, and took upon himself the duty to educate her. He was amazed at her docility and the depth of her spiritual wisdom.

When Margaret was sixteen years old, her parents heard of a shrine in Citta di Castello, Italy, where many sick people were cured. They made a pilgrimage to the shrine so that she could pray for healing. However, Margaret, open to the will of God, was not healed that day, or the next, so her parents callously abandoned her in the streets of the town and left for home, never to see her again. At the mercy of the passersby, Margaret had to beg her food and eventually sought shelter with some Dominican nuns.

W. R. Bonniwell writes, “Her cheerfulness, based on her trust in God’s love and goodness, was extraordinary. She became a Dominican tertiary and devoted herself to tending the sick and the dying” as well as prisoners in the city jail.

Bl. Margaret helped innumerable others by her life and her good deeds, finding holiness by uniting her sufferings to Christ’s. And now, some 670 years after her death, she teaches us valuable lessons by her very being.

Bl. Margaret lived a life of hope and faith, practicing heroic charity, though little was shown her in return. She came from a home where she was deprived, not because her parents had no wealth, but because they valued their material wealth and status more than their spiritual treasures.

Deprived of all human companionship, Margaret learned to embrace her Lord in solitude. Instead of becoming bitter, she forgave her parents for their ill treatment of her and treated others as well as she could. Her cheerfulness stemmed from her conviction that God loves each person infinitely, for He has made each person in His own image and likeness. This same cheerfulness won the hearts of the poor of Castello, and they took her into their homes for as long as their purses could afford. She passed from house to house in this way, “a homeless beggar being practically adopted by the poor of a city” (Bonniwell, 1955).

Bl. Margaret died on April 13, 1320 at the age of 33. More than 200 miracles have been credited to her intercession since her death. She was beatified in 1609. Thus, the daughter that nobody wanted is now one of the glories of the Church. Her body remains incorrupt.
Text Edited from the Nashville Dominicans.
(Novena from Catholic Doors Ministry)

NOVENA TO BLESSED MARGARET OF CASTELLO (to be said for 9 days)
First Day:

O Blessed Margaret of Castello, In embracing your life just as it was,
You gave us an example of resignation To the Will of god. In so accepting God’s Will,
You knew that you would grow in virtue, Glorify God, save your own soul,
And help the souls of your neighbors. Obtain for me the grace,
To recognize the will of God, In all that may happen to me in my life,
And so resign myself to it. Obtain for me also the special favor,
Which I now ask, Through your intercession with God.

Say this prayer Each day of the Novena: Let us pray…O God by whose Will The blessed virgin, Margaret, Was blind from birth, That the eyes of her mind
Being inwardly enlightened She might think without ceasing
On You alone; Be the light of our eyes,
That we may be able To flee the shadows in this world,
And reach the home Of never-ending light.
We ask this through Christ our Lord.  Amen.

Jesus, Mary, Joseph, Glorify your servant blessed Margaret,
By granting the favor We so ardently desire. This we ask in humble submission
To God’s Will, For His Honor and Glory And the salvation of souls.
Say 1 Our Father, 1 Hail Mary and 1 Glory be each day of the Novena.

O Blessed Margaret of Castello, In reflecting so deeply
Upon the sufferings and death Of our Crucified Lord,
You learned courage And gained the grace To bear your own afflictions.
Obtain for me The grace and courage That I so urgently need
So as to be able to bear My infirmities and endure my afflictions
In union with our Suffering Savior. Obtain for me also The special favor which I now ask
Through your intercession with God. Let us pray…

O Blessed Margaret of Castello, Your love for Jesus
In the Blessed Sacrament Was intense and enduring.
It was here In intimacy with the Divine Presence
That you found spiritual strength To accept suffering,
To be cheerful, patient and kindly Towards others.
Obtain for me the grace That I may draw from this same source,
As from an exhaustible font, The strength whereby I may be
Kind and understanding Of everyone despite whatever pain or discomfort
May come my way. Obtain for your intercession with God.
Let us pray…

O Blessed Margaret of Castello, You unceasingly turned to God in prayer
With confidence and trust In His Fatherly love.
It was only through continual prayer That you were enabled
To accept your misfortunes, To be serene, patient, and at peace.
Obtain for me the grace To persevere in my prayer,
Confident that God will give me The help to carry whatever cross
Comes into my life. Obtain for me also the special favor
Which I now ask Through your intercession with God.
Let us pray…

O Blessed Margaret of Castello, In imitation of the Child Jesus,
Who was subject to Mary and Joseph, You obeyed your father and mother,
Overlooking their unnatural harshness. Obtain for me
That same attitude of obedience Toward all those
Who have legitimate authority over me,
Most especially toward The Holy Roman Catholic Church.
Obtain for me also The special favor which I now ask
Through your intercession with God.

O Blessed Margaret of Castello, Your miseries taught you
Better than any teacher The weakness and frailty
Of human nature. Obtain for me The grace to recognize
My human limitations And to acknowledge
My utter dependence upon God. Acquire for me
That abandonment which leaves me Completely at the mercy of God
To do with me whatsoever He wills. Obtain for me also
The special favor which I now ask Through your intercession with God.
Let us pray…

O blessed Margaret of Castello, You could have so easily
Become discouraged and bitter; But, instead, you fixed your eyes
On the suffering Christ And there you learned from Him
The redemptive value of suffering - How to offer your pains and aches,
In reparation for sin And for the salvation of souls.
Obtain for me the grace To learn how to endure
My sufferings with patience. Obtain for me also
The special favor which I now ask Through your intercession with God.

O Blessed Margaret of Castello, How it must have hurt
When your parents abandoned you! Yet you learned from this
That all earthly love and affection, Even for those who are closest,
Must be sanctified. And so, despite everything,
You continued to love your parents – But now you loved them in God.
Obtain for me the grace That I might see
All my human loves and affections In their proper perspective…
In God and for god. Obtain for me also
The special favor which I now ask
Through your intercession with God.

O Blessed Margaret of Castello, Through your suffering and misfortune,
You became sensitive To the sufferings of others.
Your heart reached out To everyone in trouble –
The sick, the hungry, the dying prisoners. Obtain for me the grace
To recognize Jesus in everyone With whom I come into contact,
Especially in the poor, The wretched, the unwanted!
Obtain for me also The special favor which I now ask
Through your intercession with God.

O my God, I thank you For having given
Blessed Margaret of Castello To the world as an example
Of the degree of holiness That can be attained by anyone
Who truly loves you, Regardless of physical abnormalities.
In today’s perverted culture, Margaret would have, most likely,
Never been born; Death through abortion
Being preferable to life, Especially life In an ugly distorted twisted body.
But Your ways are not the world’s ways… And so it was Your Will
That Margaret would be born into the world With just such a malformed body.
It is Your way that uses our weakness To give testimony to Your power.
Margaret was born blind, So as to see You more clearly;
A cripple, so as to lean on You completely; Dwarfed in physical posture,
So as to become a giant in the spiritual order; Hunch-backed,
So as to more perfectly resemble The twisted, crucified body of Your Son.
Margaret’s whole life Was an enactment of the words
Expressed by Paul: “So I shall be very happy
To make my weaknesses my special boast
So that the power of Christ may stay over me
And that is why I am content With my weaknesses,
And with insults, hardships, Persecutions and the agonies
I go through for Christ’s sake. For it is when I am weak that I am strong.” (2 Cor 12:10).

I beseech you, O God, To grant through the intercession
Of Blessed Margaret of Castello, That all the handicapped …
And who among us is not?… All rejected, all unwanted of the world
May make their weaknesses Their own special boast
So that your power may stay over them
Now and forever.

Blessed Margaret of Castello, pray for us.
Posted by Jesus Caritas Est at 7:37 PM