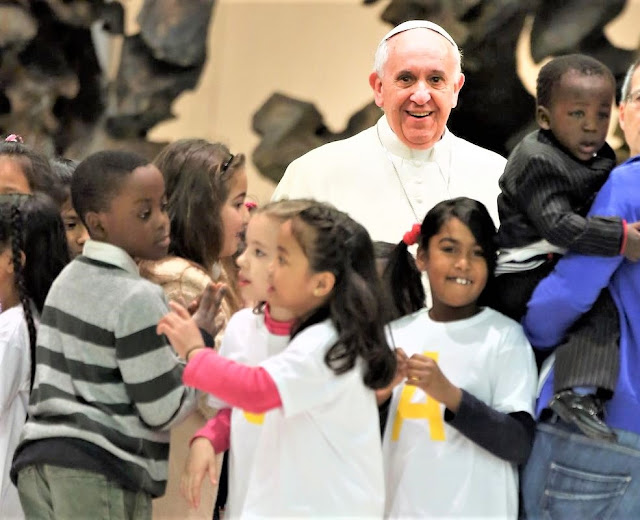 Vatican News report: Pope Francis visited the Vatican's summer camp and surprised the children participating in a Vatican-sponsored summer camp with a personal visit. The Director of the Holy See Press Office, Matteo Bruni, released the information on Monday evening that this morning, a little after 9:00, the Holy Father visited the children participating in Estate Ragazzi (Summer Kids Camp) that is taking place inside Vatican City State. The children were eating breakfast in Paul VI Hall when the Pope came.
Pope Francis visited each table, conversing with the children. He also visited the play areas set up inside the Hall. A little while later, sitting down with the children, the Pope encouraged them to make new friends. "People who only know how to have fun by themselves are selfish. You have to be together, with friends, to have a good time." Finally, before returning to Santa Marta around 10:00, he greeted the people managing the camp and thanked them for Summer Kids Camp opened at the beginning of July. It is taking place in the Vatican Gardens, the Vatican heliport and in Paul VI Hall. About 100 children of Vatican employees, ages 5 to 14, are participating in the camp that includes moments of fun, games, learning and prayer throughout the day. Activities include swimming; tennis, football, ping pong and basketball matches; sliding down an inflatable slide – with all anti-Covid precautionary measures are being observed. The Vatican Governorate organized the Camp desired by Pope Francis. Father Franco Fontana, the chaplain of the Vatican Gendarmerie, is coordinating the initiative. Giving the children the opportunity of “living their summer serenely” is how he summarized the motivation behind Summer Kids Summer Camp. Members of the Salesians of Don Bosco are collaborating in managing the camp, along with an association called “Tutti in una festa” (Everyone in one party). .
Edited from VaticanNews.va - Image Source: Google Images
Posted by Jesus Caritas Est at 2:34 PM