RIP - 2 Italian Priest Missionaries in Madagascar Die of COVID-19, who Served the Poor for over 25 years 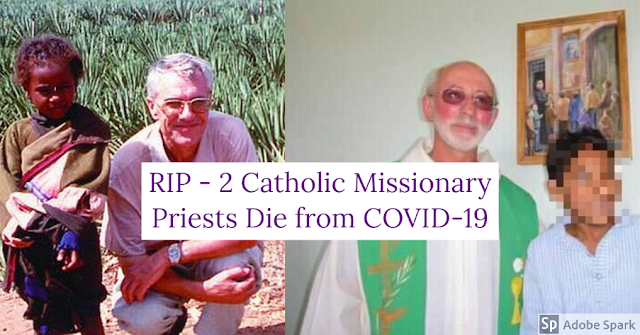 EUROPE/ITALY - Two Italian missionaries at the service of the poor have died of coronavirus in Madagascar Saturday, 25 July 2020 Rome (Agenzia Fides) - The Catholic Church, in its missionary commitment in many parts of the world, is paying for its contribution to the Covid-19 pandemic which does not spare peoples and nations from all continents. In Antananarivo, two Italian missionaries have died. They had spent decades serving the African country and remained close to the population even during this pandemic period. On 21 July, Father Albano Passarotto, an 80-year-old Vincentian religious died, for 56 years a missionary in Madagascar and on 23 July Don Luigi Piotto, of the Opera Don Orione, 65 years old died, a missionary on the African island for 28 years.
Ordained a priest in 1965, Father Albano Passarotto always carried out his mission in Madagascar, dedicating himself especially to the poorest children, creating schools, orphanages, care centers and structures that would guarantee education and assistance to the population and in particular to children. He currently ran a school in the south of the island that he had founded to guarantee hundreds of children the opportunity to study, as well as offering them two meals a day, since most of them come from families who live in camps.
In 1992 Don Luigi Piotto had left for Madagascar. He spent all twenty-eight years of his missionary life in Antsofinondry, as Parish Priest, Director, in charge of the professional school. He had always been at the service of the poor. He dedicated his life in promoting the education of children and young people, ensuring them a worthy future. From 2003 to 2010 he was Coordinator of the Orionine Missions in Madagascar, and had been appointed Director and Treasurer from the establishment of the "Marie, Reine du Madagascar" Delegation. (SL) (Agenzia Fides, 25/7/2020
Posted by Jesus Caritas Est at 10:36 AM