Archbishop of San Francisco Writes "Americans’ right to worship is being denied by governments. I won’t be silent anymore." 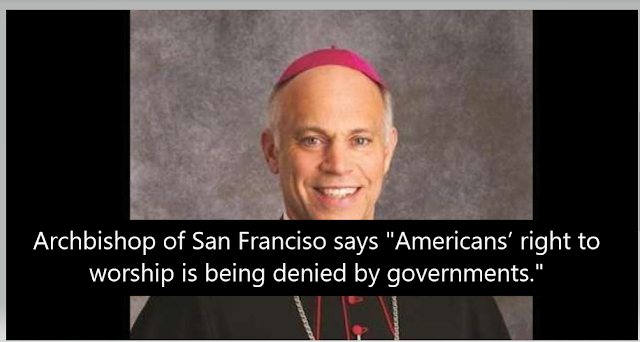 I never expected that the most basic religious freedom, the right to worship — protected so robustly in our Constitution’s First Amendment — would be unjustly repressed by an American government. But that is exactly what is happening in San Francisco. For months now, the city has limited worship services to just 12 people outdoors. Worship inside our own churches is banned. The city recently announced it will now allow 50 for outdoor worship, with a goal of permitting indoor services up to a maximum of 25 people by Oct. 1 — less than 1 percent of the capacity of San Francisco’s St. Mary’s Cathedral. This is not nearly enough to accommodate the hundreds of thousands of Catholics in San Francisco. In imposing these restrictions, the city is turning a great many faithful away from their houses of prayer. People can freely go to parks here, as long as they stay six feet apart. If they follow proper social distancing and wear masks, people can eat on an outdoor patio with no hard numerical limit.
Indoor shopping malls are already open at 25 percent capacity. Catholics in San Francisco are increasingly noticing the simple unfairness. As one of my parishioners asked recently, “Why can I spend three hours indoors shopping for shoes at Nordstrom’s but can’t go to Mass?” And it is not just San Francisco. According to the Becket Fund for Religious Liberty, six states with a combined population of 67 million Americans single out religious worship for unfavorable treatment compared to similar secular activities: California, New Jersey, Maine, Virginia, Connecticut and Nevada. We Catholics are not indifferent to the very real dangers posed by covid-19.
This is one of the reasons Catholic churches have developed rigorous protocols to protect public health in our facilities. We submitted our safety plans to the city in May along with other faith communities, and while indoor retailers had their plans approved and went into operation, we are still waiting to hear back.
Meanwhile, the scientific evidence from other jurisdictions is clear: These safeguards are working. As three infectious-disease specialists who reviewed the evidence on more than 1 million public Masses over the past few months concluded, there have been no documented outbreaks of covid-19 linked to church attendance in churches that follow the protocols. We have demonstrated that we know how to hold Mass safely.
There is no reason not to allow us to put that knowledge into practice. Nor do our concerns stem from hostility toward government. We Catholics respect legitimate authority, and we recognize that the government has a right to impose reasonable public health rules, just as we recognize its right to issue safety codes for our church buildings. But when government asserts authority over the church’s very right to worship, it crosses a line. Our fundamental rights do not come from the state. As the authors of our Declaration of Independence put it, they are “self-evident,” that is, they come from God. Even this injustice, though, is not as hurtful as the simple lack of compassion.
I sometimes wonder whether the increasingly secular elites imposing these restrictions understand the pain they are unnecessarily inflicting. The sacraments as we Catholics understand them cannot be live-streamed. People are being denied the religious worship that connects them with God and one another.
For hundreds of thousands of San Franciscans facing the simultaneous challenges of a pandemic and economic downturn, the church is their key source of spiritual, emotional and practical help. I worry about the poor, the jobless and especially the addicted whose major access to community help is the Alcoholics Anonymous meetings formerly held in churches all over the city and the country. As one of my parishioners, Kathryn Reese, wrote recently in the San Francisco Chronicle: “Even more than food for my body, this is food for my soul. I need it. My faith is what got me through all these years, raising my kids, going through a divorce, working as a correctional officer and correctional counselor in San Quentin, and volunteering for my community.” And the Rev. Moises Agudo, who pastors the overwhelmingly Latino churches in the Mission District, echoes the sentiment, saying that his people have lost many things because of the pandemic but “the consolations of the Mass should not be one of those things.” We want to be partners in protecting the public health, but we cannot accept profoundly harmful and unequal treatment without resisting.
This is why I and other Catholics from across San Francisco will join in a public demonstration this Sunday calling on the city’s mayor, London Breed, to treat religious believers fairly. At our demonstration, we will not be asking for special treatment.
We just don’t want religious worshipers singled out for unfavorable treatment relative to people participating in activities with comparable risk profiles. All we are seeking is access to worship in our own churches, following reasonable safety protocols — the same freedoms now extended to customers of nail salons, massage services and gyms. It’s only fair, it’s only compassionate, and, unlike with these other activities, it’s what the First Amendment demands.
Source: https://www.washingtonpost.com/opinions/2020/09/16/archibishop-salvatore-cordileone-right-to-worship/