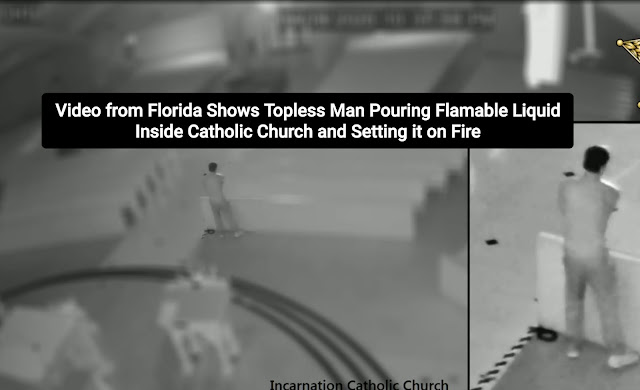 A video released by the Hillsborough County Sheriff's department shows a topless man pouring gasoline on pews and setting them on fire. Video captured the suspect breaking into a Florida church on Friday, September 18, 2020 at night. The suspect poured flammable liquid over some pews. The Incarnation Catholic Church in Florida pews were set on fire. The incident was filmed by surveillance cameras in the county of Hillsborough, Florida. The Hillsborough County Sheriff's Office wrote on Facebook: “On Friday at 10.36 pm the suspect broke into Incarnation Catholic Church in Town ’N’ Country and lit several pews on fire." "Video shows him pouring flammable liquid onto three wooden pews before setting them on fire." According to police, the man ran away from the scene at 10.39pm. The suspect broke into the church by throwing items at a glass pane on the entrance doors. The suspect appeared to flee the burning building empty-handed. The fire reportedly caused 'thousands of dollars in damages' to the church.
Posted by Jesus Caritas Est at 10:18 AM