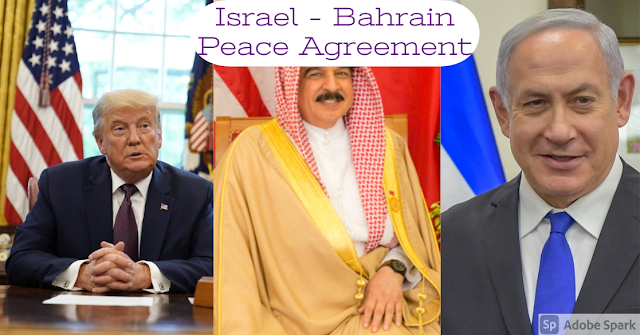 The White House Announced on September 11, 2020 a peace agreement between Bahrain and Israel. However, Asia News It reports that the agreement also breaks with the past of the Arab countries that had always made the birth of a Palestinian state a pre-condition of relations with Israel. Now this condition has been removed. It is maintained – and no-one knows for how long - only by Saudi Arabia. The Arab League, once strongly pro-Palestinian, has also given its backing to relations with Israel. The Palestinians feel betrayed. Ahmad Majdalani, social affairs minister in the Palestinian Authority, classifies the agreement as "a stab in the back for the Palestinian cause and the Palestinian people". For Hamas, which controls the Gaza Strip, it is "an aggression" that brings "serious prejudice" to the Palestinian cause.
FULL TEXT Release from The White House:
President Donald J. Trump Has Brokered a Historic Deal Between Israel and the Kingdom of Bahrain
FOREIGN POLICY

Now that the ice has been broken, I expect more Arab and Muslim countries will follow the United Arab Emirates’ lead.

SECURING ANOTHER HISTORIC AGREEMENT:
President Donald J. Trump has brokered a deal to establish full diplomatic relations between Bahrain and Israel – the second such agreement between Israel and an Arab nation in less than one month.

Israel and Bahrain have committed to begin the exchange of embassies and ambassadors, start direct flights between their countries, and launch cooperation initiatives across a broad range of sectors.
This peace deal is a significant step forward for both Israel and Bahrain.
It further enhances their security while creating opportunities for them to deepen their economic ties.
This deal comes on the heels of the historic normalization agreement between Israel and the United Arab Emirates.
The United Arab Emirates and Bahrain are the first Arab nations to normalize relations with Israel in more than 25 years.
The United States will continue to support the people of Bahrain as they work to counter terrorism and extremism, develop economically, and build new peaceful partnerships across the region.
CREATING THE CONDITIONS FOR PEACE:  President Trump’s wise foreign policy strategy has created the conditions for peace between Israel and its neighbors.
When President Trump took office, the Middle East was in a state of extreme turmoil.
President Trump has worked to rebuild trust with our regional partners and identify their shared interests, moving them away from the conflicts of the past.
Thanks to the President’s bold foreign policy vision and his acumen as a dealmaker, nations across the region are realizing the benefits of his thoughtful approach.
As the President’s work continues, more Arab and Muslim countries will likely seek to normalize relations with Israel.
Each country that normalizes relations will build upon the other, bringing peace and prosperity to the region and the people who live there.
AN UNPRECEDENTED REGIONAL TRANSFORMATION: After decades of instability and crisis, nations across the Middle East and Africa are increasingly working together to build a more peaceful and prosperous future.
Thanks to President Trump’s leadership, the Arab world is experiencing the most rapid geopolitical transformation in more than a generation.
As more countries normalize relations with Israel, the region is becoming more stable, secure, and prosperous.
Expanded business and financial ties between economies will accelerate growth and economic opportunity across the region.
Agreements with Bahrain and the United Arab Emirates also help to advance President Trump’s vision for finding a fair and lasting peace between Israel and the Palestinians.
The United States will continue to stand with the people of the region as they work to build a brighter, more hopeful future.
Press Release Source: https://www.whitehouse.gov/briefings-statements/president-donald-j-trump-brokered-historic-deal-israel-kingdom-bahrain/