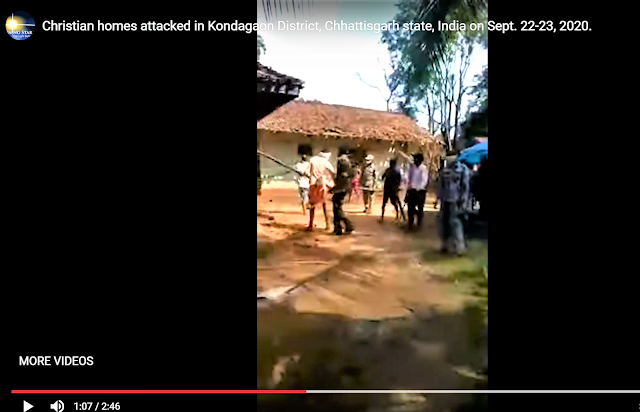 NEW DELHI (Morning Star News) – Incited by Hindu extremists, thousands of tribal animists in Chhattisgarh, India last week drove Christians in three villages from their homes in assaults that police declined to prevent or stop in spite of prior warnings, sources said.

The attacks on Sept. 22-23 by mobs that swelled to more than 3,000 agitators damaged homes, sent Christians fleeing for their lives and left a woman hospitalized with serious injuries, but police officers’ only response was to pressure Christians to contribute to the Hindu festivals that were the touch point of the hostilities.

Sivram Koyam, a resident of Kakadbeda in Kondagaon District, said he and other Christians were at the local police station on Sept. 22 trying to warn officers of impending violence when they received calls from relatives saying fierce mobs were attacking their homes.

“From three in the afternoon till eight in the night, I pleaded with and begged the police officers to go and stop them, but they did not go,” Koyam told Morning Star News. “The furious mob came in search of me, and not finding me home, they picked up my wife and smashed her on the ground three times.”

The mob of about 3,000 animists were chanting Hindu slogans as they damaged homes in Kakadbeda village, he said.

“One of them tore my wife’s blouse [the garment worn beneath a saree],” Koyam said. “Besides grievous internal injuries, my wife was gripped with fear and traumatized by the incident. She developed fever and could not move due to severe pain and injuries.”

She had difficulty breathing due to chest injuries and was rushed to a hospital in Kondagaon 11 miles way, he said. She underwent treatment and was expected to be discharged soon.