Pope Francis on Year of Dante "...fascination of that which is true, beautiful and good, ultimately the fascination of God, makes its powerful attraction felt." FULL TEXT 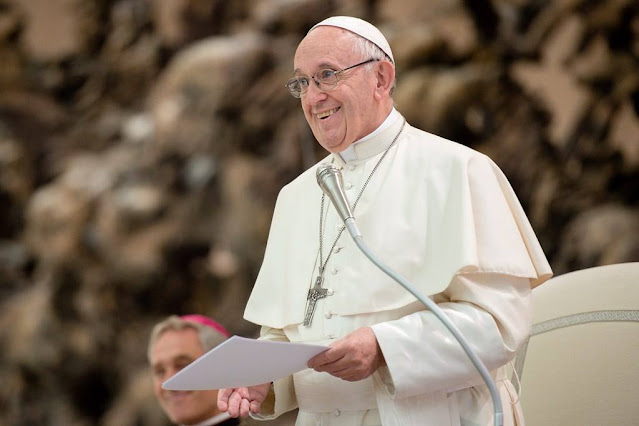 TO A DELEGATION FROM THE ARCHDIOCESE OF RAVENNA-CERVIA,
ON THE OCCASION OF THE YEAR OF DANTE

I welcome you and I thank you for coming to share with me the joy and the effort of opening the celebrations for the seventh centenary of the death of Dante Alighieri. In particular, I thank Archbishop Msgr. Ghizzoni for his words of introduction.

Ravenna, for Dante, is the city of “last refuge” [1] – the first was Verona. Indeed, in your city the poet spent his last years, and brought his work to completion; according to tradition, the final canti of Paradiso were composed there.

So, in Ravenna he concluded his earthly journey; and he concluded that exile that so greatly marked his existence and also inspired his writing. The poet Mario Luzi has highlighted the importance of the turmoil and the higher rediscovery that the experience of exile held for Dante. This leads us immediately to think of the Bible, of the exile of the people of Israel in Babylon, which constitutes, so to say, one of the “matrices” of Biblical revelation. In a similar way for Dante, exile was so significant as to become a key to interpreting not only his life, but also the “journey” of every man and woman in history and beyond.

Dante’s death in Ravenna took place – as Boccaccio writes – “On the day that the Church celebrates the exaltation of the Holy Cross”[2]. It brings to mind that cross that the Poet certainly saw in the small midnight blue dome, scattered with nine hundred stars, of the Mausoleum of Galla Placidia; or in that sparkling and "flaming" Christ – to use the image of Paradise – (cf. XIV, 104), of the apse of Sant'Apollinare in Classe.

In 1965, on the occasion of the seventh centenary of Dante’s birth, Saint Paul VI gave the city of Ravenna the gift of a gold cross for his tomb, which had remained until then – as he said, “without such as sign of religion and hope” (Address of the Sacred College and to the Roman Prelature, 23 January 1966). That same cross, on the occasion of this centenary, will shine again in the place where the earthly remains of the Poet are conserved. May this be an invitation to hope, that hope of which Dante is prophet (see Message on the 750th anniversary of the birth of Dante Alighieri, 4 May 2015).

It is therefore to be hoped that the celebrations for the seventh centenary of the death of the supreme Poet may inspire us to revisit his Comedy so that, made aware of our condition as exiles, we may allow ourselves to be we will allow ourselves to be provoked to undertake that path of conversion “from disorder to wisdom, from sin to holiness, from misery to happiness, from the terrifying contemplation of hell to the beatifying contemplation of paradise” (Saint Paul VI, Apostolic Letter Motu proprio Altissimi cantus, 7 December 1965). Dante, in fact, invites us to rediscover once more the lost or unclear meaning of our human journey. It may seem, at times, as if these seven centuries have opened up an unbridgeable distance between us, men and women of the postmodern and secularised age, and him, the extraordinary exponent of a golden age of European civilisation. And yet something tells us that it is not the case. Teenagers, for instance - even those of today - if they have the opportunity to encounter Dante’s poetry in a way that is accessible to them, find on the one hand, inevitably, a great distance from the author and his world, and yet, not the other, they perceive a surprising resonance. This happens especially where allegory leaves space for the symbol, where the human being appears most evident and exposed, where civil passion vibrates most intensely, where the fascination of that which is true, beautiful and good, ultimately the fascination of God, makes its powerful attraction felt.

So, making the most of this resonance that crosses the centuries, we too – as Saint Paul VI invited us to do – will be able to be enriched by the experience of Dante to traverse the many dark woods of our land and happily make our pilgrimage through history, to reach the goal dreamed of and desired by every man: “the Love that moves the sun and the other stars” (Paradiso, XXXIII, 145) (see Message on the 750th anniversary of the birth of Dante Alighieri, 4 May 2015).

Thank you again for this visit, and I wish you all the best for the centenary celebrations. With God’s help, next year I propose to offer a more extensive reflection in this regard. I cordially bless each one of you, your co-workers and the entire community of Ravenna. And please do not forget to pray for me.