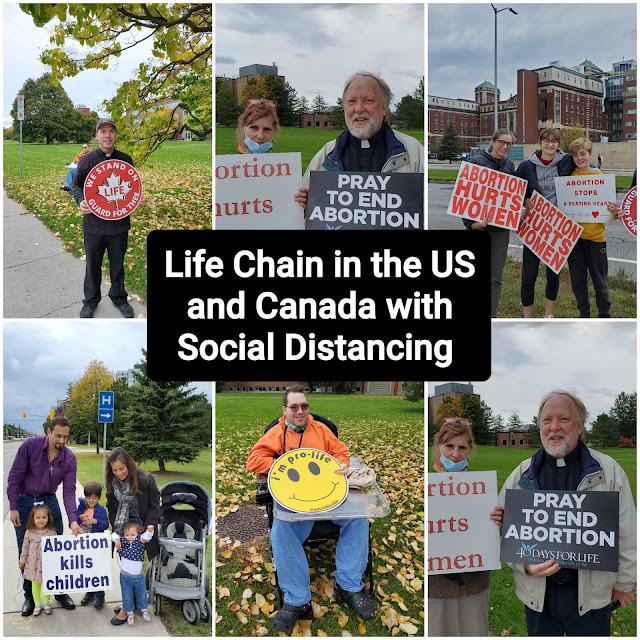 Thousands of pro-lifers stood outside despite COVID-19 and the weather on Sunday, October 4, 2020 to pray for unborn babies and their mothers.

People gathered in nearly 1,600 communities in the United States and Canada for the annual Life Chain, according to organizers. The event brings pro-lifers together in their local communities to pray for an end to abortion and peacefully witness to the truth about life in the womb. Due to COVID-19 many pro-lifers maintained a social distance. Some Life Chains were also postponed to November 1. (The following video shows images from the Socially Distanced Canadian March for Life in the Capitol with Fr. Mark Goring)

Sharron Albertson told LifeNews about one local coordinator’s story: “One year when I was beginning to question if being part of a Life Chain was worth the time, a woman stopped and asked who was in charge. The participants pointed to me and the woman came over and said, ‘See that little person in the back seat. I decided not to have an abortion because you all were here a couple years ago.’ She hugged me and got back in her card and drove off before I could think of anything to say.”

Peaceful witnessing is a key part of the Life Chain. The events typically are held along busy roadways in the communities where pro-lifers hold signs that raise awareness about unborn babies, pregnancy resources and more.

The local news outlets noted that the Life Chains were peaceful, respectful events.

Every year, nearly 900,000 unborn children are killed in legal abortions in America, and organizers said the Life Chains are one small step toward ending the violence.

“From the very young to the very old, life We’re here to fight a battle,” organizer Karen Hamrick said. “We’re not political, but our battle is fought in the heavenly because we’re not warring against flesh and blood…We’re using the best weapon that there is and that is prayer.”

The Life Chain began more than 30 years ago in California, and quickly grew into a national and international event with communities in Canada and the United States participating.

While Life Chains are promoted as religious, prayer-oriented events, organizers said they also welcome non-religious pro-lifers to participate. Participants are encouraged to pray and/or solemnly reflect on the violence of abortion in a public place where they can witness to the truth about abortion in their community.

More than 61 million unborn babies have been aborted legally in the United States since 1973.
With notes from LifeNews.com