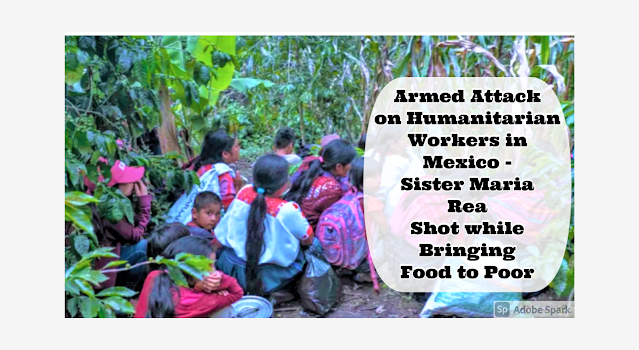 AMERICA/MEXICO - Religious woman injured in attack on humanitarian workers: "We do not want any more suffering!" Friday, 20 November 2020 San Cristóbal de las Casas (Agenzia Fides) - In a heartfelt appeal to human rights activists, the media and to all men and women of good will and to the faithful of the Diocese of San Cristóbal de las Casas, Bishop Rodrigo Aguilar Martínez expresses his deep regrets "in the face of suffering, pain, death and displacement due to the conflicts between the communities Santa María Magdalena (Aldama) and Santa Marta".
The Bishop reiterates his great concern "because the underlying problem has not been resolved and violence has increased with daily attacks in various communities of Aldama. On several occasions, we have denounced this situation to the federal and state authorities and asked for the disarmament of paramilitary groups".
Employees of the Caritas of San Cristóbal de las Casas and the Fund for the Health of Indigenous Children of Mexico, who provide humanitarian aid in the region, were also victims of the violence: on November 18 they were killed in the community of Cotzilnam, Aldama (Chiapas, Mexico) by an armed paramilitary group. "Because of the situation – said the Bishop -, humanitarian aid has not been delivered to the communities suffering from food crisis and basic services.
Among others, Sister María Isabel Hernández Rea, who works as a pastoral worker in our diocese in the region, was wounded in the attack". Mgr. Rodrigo Aguilar Martínez, in his message, also signed by his auxiliary bishop and commissioner for justice and peace of the diocese of San Cristóbal de las Casas, condemns these recent and previous attacks and calls for a condemnation of those responsible so that justice can be guaranteed for the parishes of the state of Chiapas: "We urge the Mexican state to disarm and dismantle the civil paramilitary armed groups in the area and bring them to justice along with those who supply them with weapons. We do not want any more wounded or dead! We do not want any more dispiace people! We do not want any more suffering of women, girls and boys! We do not want any more weapons in our country!" (SL) (Agenzia Fides, 20/11/2020)