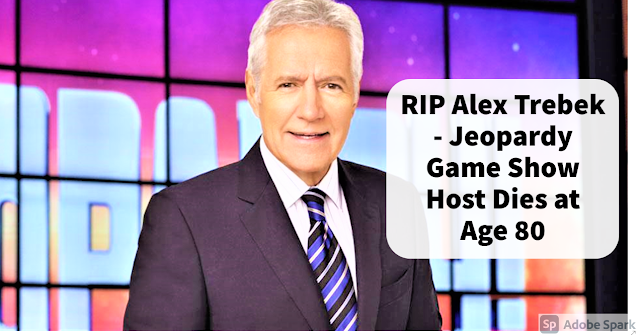 Alex Trebek, the host of the game show Jeopardy! since 1984, passed away from pancreatic cancer on Sunday, November 8, 2020. He was 80-years-old. The Twitter account of ‘Jeopardy!’ posted announcing the news, saying Trebek passed away peacefully. The Canadian-born host was suffering from Stage 4 pancreatic cancer.

Jeopardy! is saddened to share that Alex Trebek passed away peacefully at home early this morning, surrounded by family and friends. Thank you, Alex. pic.twitter.com/Yk2a90CHIM


The Catholic Fordham University bestowed the Fordham Founder’s Award on Alex and Jean Trebek at the Bel-Air Country Club on Jan. 7, 2020.

“It’s humbling and it’s gratifying; because of the program that I have hosted for 36 years I have managed to touch the lives of so many people,” he said.Over the past decade, Alex and Jean Trebek have shown themselves to be true partners in the mission of Fordham—through their support for the University, but also through their efforts to promote learning and give back to society.

Alex Trebek has hosted the popular quiz show Jeopardy! for more than three decades, receiving numerous accolades, including six Daytime Emmys and a 2011 Peabody Award for “encouraging, celebrating, and rewarding knowledge.”
In 2015, Trebek and his wife established a scholarship fund at Fordham that today benefits students from north and east Harlem. Their son, Matthew, is a 2013 graduate of Fordham College at Rose Hill, and Alex Trebek was awarded an honorary doctorate at the University’s commencement in 2011.
"If there's one thing I have discovered in the past year, it is (the) power of prayer," he said in accepting the Fordham award. "I learned it from the Jesuits when I was a kid, I learned it from the Oblates of Mary Immaculate when I was in boarding school."
Jesuit Father Joseph M. McShane, president of Fordham, said Alex Trebek, who was raised a Catholic, is "a brilliant man who is the nation's schoolteacher." If people think the "Jeopardy" host is a good man, "you don't know the half of it," the priest said. "He's better than you think." Father McShane called him a man of "quiet generosity."
The Trebeks have two children, both of whom they sent to Jesuit schools. Daughter Emily is a 2015 graduate of Loyola Marymount University in Los Angeles. Son Matthew graduated from Fordham College at Rose Hill in 2013. Fordham College is the oldest of the university's 11 schools. (Edited from FordamUniversity News and Global News)
Please Pray for the Repose of his Soul and for his family....