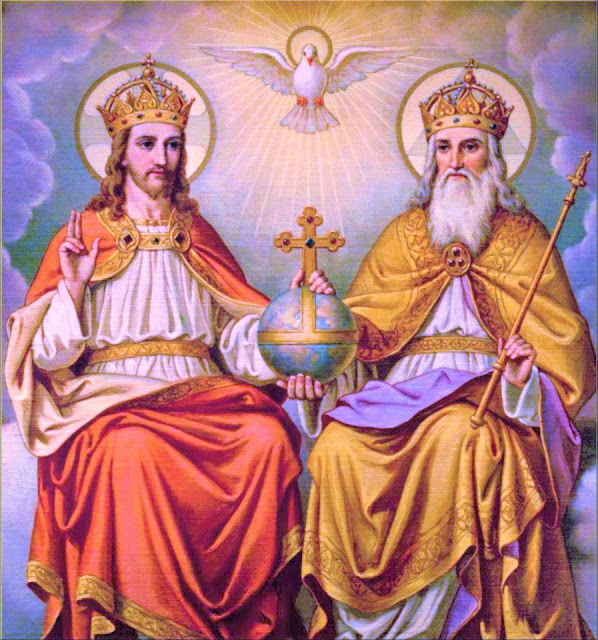 Wednesday of the Third Week in Ordinary Time
Lectionary: 319
Reading I
Heb 10:11-18
Every priest stands daily at his ministry,
offering frequently those same sacrifices
that can never take away sins.
But this one offered one sacrifice for sins,
and took his seat forever at the right hand of God;
now he waits until his enemies are made his footstool.
For by one offering he has made perfect forever
those who are being consecrated.
The Holy Spirit also testifies to us, for after saying:
This is the covenant I will establish with them
after those days, says the Lord:
“I will put my laws in their hearts,
and I will write them upon their minds,”
he also says:
Their sins and their evildoing
I will remember no more.
Where there is forgiveness of these, there is no longer offering for sin.
Responsorial Psalm
110:1, 2, 3, 4
R.    (4b)  You are a priest for ever, in the line of Melchizedek.
The LORD said to my Lord: “Sit at my right hand
till I make your enemies your footstool.”
R.    You are a priest for ever, in the line of Melchizedek.
The scepter of your power the LORD will stretch forth from Zion:
“Rule in the midst of your enemies.”
R.    You are a priest for ever, in the line of Melchizedek.
“Yours is princely power in the day of your birth, in holy splendor;
before the daystar, like the dew, I have begotten you.”
R.    You are a priest for ever, in the line of Melchizedek.
The LORD has sworn, and he will not repent:
“You are a priest forever, according to the order of Melchizedek.”
R.    You are a priest for ever, in the line of Melchizedek.
Alleluia
R. Alleluia, alleluia.
The seed is the word of God, Christ is the sower;
all who come to him will live for ever.
R. Alleluia, alleluia.
Gospel
Mk 4:1-20
On another occasion, Jesus began to teach by the sea.
A very large crowd gathered around him
so that he got into a boat on the sea and sat down.
And the whole crowd was beside the sea on land.
And he taught them at length in parables,
and in the course of his instruction he said to them,
“Hear this!  A sower went out to sow.
And as he sowed, some seed fell on the path,
and the birds came and ate it up.
Other seed fell on rocky ground where it had little soil.
It sprang up at once because the soil was not deep.
And when the sun rose, it was scorched and it withered for lack of roots.
Some seed fell among thorns, and the thorns grew up and choked it
and it produced no grain.
And some seed fell on rich soil and produced fruit.
It came up and grew and yielded thirty, sixty, and a hundredfold.”
He added, “Whoever has ears to hear ought to hear.”
And when he was alone,
those present along with the Twelve
questioned him about the parables.
He answered them,
“The mystery of the Kingdom of God has been granted to you.
But to those outside everything comes in parables, so that
they may look and see but not perceive,
and hear and listen but not understand,
in order that they may not be converted and be forgiven.”
Jesus said to them, “Do you not understand this parable?
Then how will you understand any of the parables?
The sower sows the word.
These are the ones on the path where the word is sown.
As soon as they hear, Satan comes at once
and takes away the word sown in them.
And these are the ones sown on rocky ground who,
when they hear the word, receive it at once with joy.
But they have no roots; they last only for a time.
Then when tribulation or persecution comes because of the word,
they quickly fall away.
Those sown among thorns are another sort.
They are the people who hear the word,
but worldly anxiety, the lure of riches,
and the craving for other things intrude and choke the word,
and it bears no fruit.
But those sown on rich soil are the ones who hear the word and accept it
and bear fruit thirty and sixty and a hundredfold.”
Prayer to Make a Spiritual Communion-
People who cannot communicate now make spiritual communionAt your feet, O my Jesus I bow down and offer you the repentance of my contrite heart, which abysses itself into its nothingness and Your holy presence. I adore you in the Sacrament of Your love, the ineffable Eucharist. I wish to receive you in the poor home that my heart offers you. In anticipation of the happiness of sacramental communion, I want to possess you in spirit. Come to me, oh my Jesus, that I may come to you. May Your love inflame my whole being, for life and death. I believe in you, I hope in you, I love you. So be it. Amen