Pope Francis says "God is faithful to His promises and guides our steps toward peace still today." in Reflection on Trip to Iraq - FULL TEXT + VIDEO 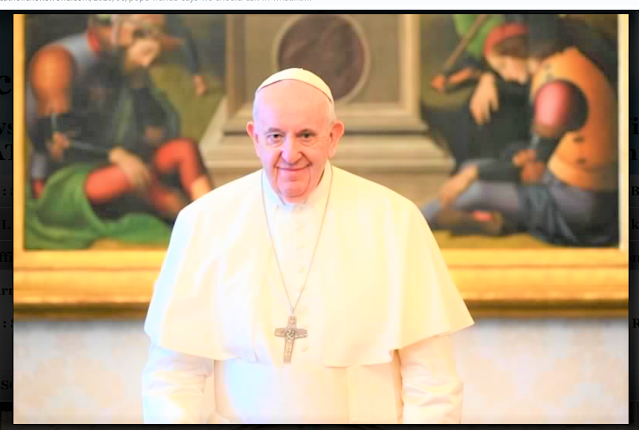 Catechesis on the Apostolic Journey to Iraq

In the past few days, the Lord allowed me to visit Iraq, carrying out a project of Saint John Paul II. Never before has a Pope been in the land of Abraham. Providence willed that this should happen now, as a sign of hope, after years of war and terrorism, and during a severe pandemic.

After this Visit, my soul is filled with gratitude – gratitude to God and to all those who made it possible: to the President of the Republic and the Government of Iraq; to the country’s Patriarchs and Bishops, together to all the ministers and members of the faithful of the respective Churches; to the religious Authorities, beginning with the Grand Ayatollah Al-Sistani, with whom I had an unforgettable meeting in his residence in Najaf.

I strongly felt a penitential sense regarding this pilgrimage: I could not draw near to that tortured people, to that martyr-Church, without taking upon myself, in the name of the Catholic Church, the cross they have been carrying for years; a huge cross, like the one placed at the entrance of Qaraqosh. I felt it particularly seeing the wounds still open from the destruction, and even more so when meeting and hearing the testimony of those who survived the violence, persecution, exile… And at the same time, I saw around me the joy of welcoming Christ’s messenger; I saw the hope of being open to a horizon of peace and fraternity, summed up in Jesus’s words that were the motto of the Visit: “You are all brothers” (Mt 23:8). I found this hope in the discourse of the President of the Republic. I discovered it again in the many greetings and testimonies, in the hymns and gestures of the people. I read it on the luminous faces of the young people and in the vivacious eyes of the elderly. People stood waiting for the Pope for 5 hours, even women with children in their arms. They waited and there was hope in their eyes.

The Iraqi people have the right to live in peace; they have the right to rediscover the dignity that belongs to them. Their religious and cultural roots go back thousands of years: Mesopotamia is the cradle of civilization. Historically, Baghdad is a city of primary importance. For centuries, it housed the richest library in the world. And what destroyed it? War. War is always that monster that transforms itself with the change of epochs and continues to devour humanity. But the response to war is not another war; the response to weapons is not other weapons. And I asked myself: who was selling the weapons to the terrorists? Who sells weapons today to the terrorists – which are causing massacres in other areas, let’s think of Africa, for example? It is a question that I would like someone to answer. The response is not war, but the response is fraternity. This is the challenge not only for Iraq. It is the challenge for many regions in conflict and, ultimately, the challenge for the entire world is fraternity. Will we be capable of creating fraternity among us? Of building a culture of brothers and sisters? Or will we continue the logic Cain began: war. Brothers and sisters. Fraternity.

For this reason, we met and we prayed with Christians and Muslims, with representatives of other religions, in Ur, where Abraham received God’s call about four thousand years ago. Abraham is our father in the faith because he listened to God’s voice that promised him a descendant. He left everything and departed. God is faithful to His promises and guides our steps toward peace still today. He guides the steps of those who journey on Earth with their gaze turned toward Heaven. And in Ur – standing together under those luminous heavens, the same heavens that our father Abraham saw, we, his descendants – the phrase you are all brothers and sisters seemed to resound once again.

A message of fraternity came from the ecclesial encounter in the Syriac-Catholic Cathedral of Baghdad, where forty-eight people, among them two priests, were killed during Mass in 2010. The Church in Iraq is a martyr-Church. And in that church that bears an inscription in stone the memory of those martyrs, joy resounded in that encounter. My amazement at being in their midst mingled with their joy at having the Pope among them.

We launched a message of fraternity from Mosul and from Qaraqosh, along the Tigris River, near the ruins of ancient Nineveh. The ISIS occupation caused thousands and thousands of inhabitants to flee, among them many Christians of a variety of confessions and other persecuted minorities, especially the Yazidi. The ancient identity of these cities has been ruined. Now they are trying hard to rebuild. The Muslims are inviting the Christians to return and together they are restoring churches and mosques. Fraternity is there. And, please, let us continue to pray for them, our sorely tried brothers and sisters, so they might have the strength to start over. And thinking of the many Iraqis who have emigrated, I want to say to them: you have left everything, like Abraham; like him, keep the faith and hope. Be weavers of friendship and of fraternity wherever you are. And if you can, return.

A message of fraternity came from the two Eucharistic Celebrations: the one in Baghdad, in the Chaldean Rite, and the one in Erbil, the city in which I was received by the President of the region and its Prime Minister, the Authorities – whom I thank a lot for having come to welcome me – and I was also welcomed by the people. Abraham’s hope, and that of his descendants, is fulfilled in the mystery we celebrated, in Jesus, the Son that God the Father did not spare, but gave for everyone’s salvation: through His death and resurrection, He opened the way to the promised land, to that new life where tears are dried, wounds are healed, brothers and sisters are reconciled.

Dear brothers and sisters, let us praise God for this historic Visit and let us continue to pray for that land and for the Middle East. In Iraq, despite the roar of destruction and weapons, the palm, a symbol of the country and of its hope, has continued to grow and bear fruit. So it is for fraternity: like the fruit of the palm, it does not make noise, but the palm is fruitful and grows. May God, who is peace, grant a future of fraternity to Iraq, the Middle East and the entire world!

I cordially greet the English-speaking faithful. May our Lenten journey bring us to the joy of Easter with hearts purified and renewed by the grace of the Holy Spirit. Upon you and your families I invoke the joy and peace of our Lord Jesus Christ. God bless you!

Summary of the Holy Father's words:

Dear Brothers and Sisters, by God’s providence, in these days I was able to make the first visit of a Pope to the land of Abraham. I thank those who made possible my Apostolic Journey to Iraq: the President and Government of the Republic, the Patriarchs, Bishops and faithful of the various Churches, and the country’s religious authorities. I am particularly grateful to Grand Ayatollah Al-Sistani for our cordial meeting in Najaf. My visit was intended as a penitential pilgrimage, to show my closeness and solidarity with a Church of martyrs in a land that has suffered so greatly from violence, terrorism and war, and witnessed a significant reduction in its Christian presence. At my meeting with religious leaders in Ur, we prayed for the growth of fraternity and cooperation between believers. There, where Abraham received God’s call, two young Iraqis – one Christian, one Muslim – gave a moving testimony to a friendship capable of respecting differences while remaining grounded in the love of God and neighbour. In the Syrian Catholic Cathedral in Baghdad, where forty-eight people were murdered in 2010, in the encounters in Mosul and Qaraqosh amid ruined churches and mosques, and in the Eucharistic celebrations in both Baghdad and Erbil, we reflected on our call as Christians to be witnesses to the forgiveness, reconciliation and peace taught by Christ. Let us pray that these days will contribute to the continuing journey towards fraternity and peace in Iraq, the Middle East, and the whole world.