Pope Francis says "The Easter proclamation, Christ is alive, Christ accompanies my life, Christ is beside me. Christ knocks at the door of my heart..." FULL TEXT + Video 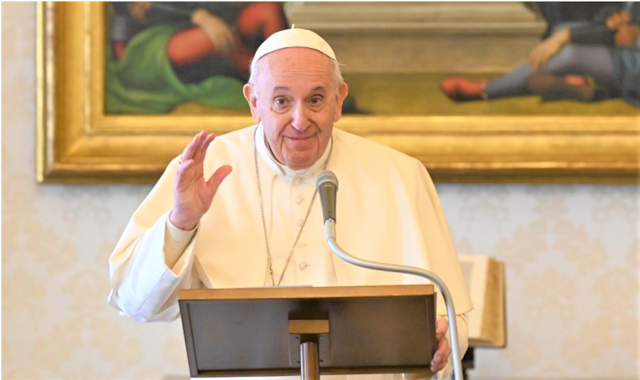 The Monday after Easter is also called the Monday of the Angel because we recall the meeting of the angel with the women who arrived at Jesus’s tomb (see Mt 28:1-15). The angel said to them: “I know that you seek Jesus who was crucified. He is not here; for he has risen (vv. 5-6). This expression “He has risen” goes beyond human capacity. Even the women who had gone to the tomb and had found it open and empty could not confirm “He has risen”, but they could only say that the tomb was empty. “He has risen” is a message… Only an angel could say that Jesus had risen, only an angel with the authority to be the bearer of a heavenly message, with the power given by God to say it, just as an angel – only an angel – had been able to say to Mary: “you will conceive a son, [….] and he will be called the Son of the Most High” (Lk 1:31-32). Because of this we call it Monday of the Angel because only an angel with the power of God could say that Jesus had risen.

Matthew the evangelist narrates that on Easter morning “there was a great earthquake; for an angel of the Lord descended from heaven and came and rolled back the stone, and sat on it” (see v. 2). That large stone, that was supposed to be the seal of the victory of evil and death, was put underfoot, it became the footstool of the angel of the Lord. All of the plans and defenses of Jesus’s enemies and persecutors were in vain. All the seals had crumbled. The image of the angel sitting on the stone before the tomb is the concrete manifestation, the visible manifestation of God’s victory over evil, the manifestation of Christ’s victory over the prince of this world, the manifestation of the victory of light over darkness. Jesus’s tomb was not opened by a physical phenomenon, but by the Lord’s intervention. The angel’s appearance, Matthew continues, “was like lightning, and his raiment white as snow. (v. 3). These details are symbols that confirm the intervention of God himself, bearer of a new era, of the last times of history because Jesus’s resurrection initiated the last times of history which can endure thousands of years, but they are the last times.

There is a twofold reaction in beholding this intervention on God’s part. That of the guards who cannot face the overwhelming power of God and are shaken by an interior earthquake: they became like dead men (see v. 4). The power of the Resurrection overthrows those who had been used to guarantee the apparent victory of death. And what did those guards have to do? To go to those who had given them orders to keep guard and to tell the truth. They had a choice to make: either to tell the truth or to allow themselves to be convinced by those who had given them the order to keep guard. And the only way to convince them was money. And those poor people, poor people, sold the truth, and with the money in their pockets they went on to say: “No, the disciples came and robbed the body”. The “Lord” money, even here, in Christ’s resurrection, is capable of having the power to deny it. The women’s reaction is different because they were expressly invited by the angel of the Lord not to be afraid, and in the end, they were not afraid – “Do not be afraid!” (v. 5) – and not to seek Jesus in the tomb.

We can reap a precious teaching from the angel’s words: we should never tire of seeking the risen Christ who gives life in abundance to those who meet him. To find Christ means to discover peace in our hearts. The same women of the Gospel, after initially being shaken – that is understandable – experience great joy in discovering the Master alive (see vv. 8-9). In this Easter Season, my wish is that everyone might have the same spiritual experience, welcoming in our hearts, in our homes and in our families the joyful proclamation of Easter: “Christ, having risen from the dead dies now no more; death will no longer have dominion over him” (Communion Antiphon). The Easter proclamation, Christ is alive, Christ accompanies my life, Christ is beside me. Christ knocks at the door of my heart so you can let him in, Christ is alive. In these days of Easter, it would be good for us to repeat this: the Lord is alive.

This certainty moves us to pray today and throughout the Easter Season: “Regina Caeli, Laetare – that is, Queen of Heaven, rejoice”. The angel Gabriel had greeted her thus the first time: “Rejoice, full of grace!” (see Lk 1:28). Now Mary’s joy is complete: Jesus lives, Love has conquered. May this be our joy as well!

After the Regina Caeli

In the atmosphere of Easter that characterizes this day, I affectionately greet all of you who participate in this moment of prayer through the means of social communication. I am thinking in particular of the elderly, those who are ill, connected from their own homes or rest homes. To them, I send a word of encouragement and recognition of their witness: I am near them. And to everyone, I hope you can live with faith these days of the Octave of Easter in which the memory of Christ’s resurrection is prolonged. Take every opportune occasion to witness to the joy and peace of the Risen Lord.

Happy, serene and holy Easter to everyone! And please do not forget to pray for me. Enjoy your lunch, and arrivederci!