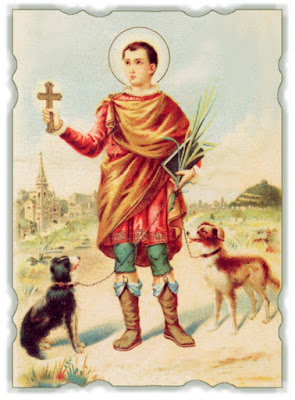 St. Vitus a MARTYR
Born: in 290, Sicily
Died:
303, Lucania, modern-day Basilicata, Italy
Patron of:
actors; comedians; Czechoslovakia; dancers; dogs; epilepsy; Mazara del Vallo, Sicily; Forio, Ischia; oversleeping; Prague, Czech Republic; rheumatic chorea (Saint Vitus Dance); snake bites; storms; Vacha, Germany; Zeven, Lower Saxony
=
According to the legend, martyrs under Diocletian; feast, 15 June. The earliest testimony for their veneration is offered by the "Martyrologium Hieronymianum" (ed. De Rossi-Duchesne, 78: "In Sicilia, Viti, Modesti et Crescentiae"). The fact that the note is in the three most important manuscripts proves that it was also in the common exemplar of these, which appeared in the fifth century. The same Martyrologium has under the same day another Vitus at the head of a list of nine martyrs, with the statement of the place, "In Lucania", that is, in the Roman province of that name in Southern Italy between the Tuscan Sea and the Gulf of Taranto. It is easily possible that the same martyr  Vitus in both cases, because only the name of a territory is given, not of a city, as the place where the martyr was venerated. This testimony to the public veneration of the three saints in the fifth century proves positively that they are historical martyrs. There are, nevertheless, no historical accounts of them, nor of the time or the details of their martyrdom. During the sixth and seventh centuries a purely legendary narrative of their martyrdom appeared which was based upon other legends, especially on the legend of Poitus, and ornamented with accounts of fantastic miracles. It still exists in various versions, but has no historical value.

According to this legend Vitus was a boy seven years of age (other versions make him twelve years old), the son of a pagan senator of Lucania. During the era of the Emperors Diocletian and Maximilian, his father sought in every way, including various forms of torture, to make him apostatize. But he remained steadfast, and God aided him in a wonderful manner. He fled with his tutor Modestus in a boat to Lucania. From Lucania he was taken to Rome to drive out a demon which had taken possession of a son of the Emperor Diocletian. This he did, and yet, because he remained steadfast in the Christian Faith, he was  tortured together with his tutor Modestus and his nurse Crescentia. By a miracle an angel brought back the martyrs to Lucania, where they died from the tortures they had endured. Three days later Vitus appeared to a distinguished matron namedFlorentia, who then found the bodies and buried them in the spot where they were. It is evident that the author of the legend has connected in his invention three saints who apparently suffered death in Lucania, and were first venerated there. The veneration of the martyrs spread rapidly in Southern Italy and Sicily, as is shown by the note in the "Martyrologium Hieronymianum". Pope Gregory the Great mentions a monastery dedicated to Vitus in Sicily ("Epist.", I, xlviii, P.L., LXXXVII, 511). The veneration of Vitus, the chief saint of the group, also appeared very early at Rome. Pope Gelasius (492-496) mentions a shrine dedicated to him (Jaffé, "Reg. Rom. Pont.", 2nd ed., I, 6 79), and at Rome in the seventh century the chapel of a deaconry was dedicated to him ("Liber Pont.", ed. Duchesne, I, 470 sq.). In the eighth century it is said that relics of St. Vitus were brought to the monastery of St-Denis by Abbot Fulrad. They were later presented to Abbot Warin of Corvey in Germany, who solemnly transferred them to this abbey in 836. From Corvey the veneration of St. Vitus spread throughout Westphalia and in the districts of eastern and northern Germany. St. Vitus is appealed to, above all, against epilepsy, which is called St. Vitus's Dance, and he is one of the Fourteen Martyrs who give aid in times of trouble. He is represented near a kettle of boiling oil, because according to the legend he was thrown into such a kettle, but escaped miraculously. The feast of the three saints was adopted in the historical Martyrologies of the early Middle Ages and is also recorded in the present Roman Martyrology on 15 June. Text from the Catholic Encyclopedia
Prayers and Devotions to St. Vitus (One of the Fourteen Holy Helpers)
Novena to St. Vitus

Almighty and eternal God! With lively faith and reverently worshiping Thy divine Majesty, I prostrate myself before Thee and invoke with filial trust Thy supreme bounty and mercy. Illumine the darkness of my intellect with a ray of Thy heavenly light and inflame my heart with the fire of Thy divine love, that I may contemplate the great virtues and merits of the saint in whose honor I make this novena, and following his example imitate, like him, the life of Thy divine Son.
Moreover, I beseech Thee to grant graciously, through the merits and intercession of this powerful Helper, the petition which through him I humbly place before Thee, devoutly saying, "Thy will be done on earth as it is in heaven." Vouchsafe graciously to hear it, if it redounds to Thy greater glory and to the salvation of my soul.
Prayer in Honor of St. Vitus
Grant us, O God, through the intercession of St. Vitus, a due estimation of the value of our soul and of its redemption by the precious blood of Thy Son Jesus Christ; so that, for its salvation, we bear all trials with fortitude. Give this Thy youthful servant and heroic martyr as a guide and protector to Christian youths, that following his example they may after a victorious combat receive the crown of justice in heaven. Through Christ our Lord. Amen.
Invocation of St. Vitus
St. Vitus, glorious martyr of Christ; in thy youth thou wast exposed to violent and dangerous temptations, but in the fear of God and for the love of Jesus thou didst victoriously overcome them. O amiable, holy youth, I implore thee by the love of Jesus, assist me with thy powerful intercession to overcome the temptations to evil, to avoid every occasion of sin, and thus to preserve spotless the robe of innocence and sanctifying grace, and to bring it unstained to the judgment-seat of Jesus Christ, that I may forever enjoy the beatific vision of God which is promised to the pure of heart. Amen.
Concluding Prayer

My Lord and my God! I offer up to Thee my petition in union with the bitter passion and death of Jesus Christ, Thy Son, together with the merits of His immaculate and blessed Mother, Mary ever virgin, and of all the saints, particularly with those of the holy Helper in whose honor I make this novena.

Look down upon me, merciful Lord! Grant me Thy grace and Thy love, and graciously hear my prayer. Amen
Source of Prayers: catholicharboroffaithandmorals