Saint June 20 : St. Silverius who was the Son of Pope Homisdas and also became Pope then Died in 537 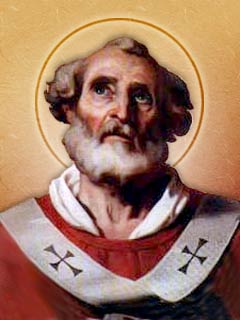 St. Silverius POPE
Feast Day:
June 20
Born:
480 at Frosinone (in modern Italy)
Died:
November 537
Patron of:
Ponza, Italy
Dates of birth and death unknown. He was the son of Pope Hormisdas who had been married before becoming one of the higher clergy. Silverius entered the service of the Church and was subdeacon at Rome when Pope Agapetus died at Constantinople, 22 April, 536. The Empress Theodora, who favoured the Monophysites sought to bring about the election as pope of the Roman deacon Vigilius who was then at Constantinople and had given her the desired guarantees as to the Monophysites. However, Theodatus, King of the Ostrogoths, who wished to prevent the election of a pope connected with Constantinople, forestalled her, and by his influence the subdeacon Silverius was chosen. The election of a subdeacon as Bishop of Rome was unusual. Consequently, it is easy to understand that, as the author of the first part of the life of Silverius in the "Liber pontificalis" (ed. Duchesne, I, 210) relates, a strong opposition to it appeared among the clergy. This, however, was suppressed by Theodatus so that, finally, after Silverius had been consecrated bishop (probably on 8 June, 536) all the Roman presbyters gave their consent in writing to his elevation. The assertion made by the author just mentioned that Silverius secured the intervention of Theodatus by payment of money is unwarranted, and is to be explained by the writer's hostile opinion of the pope and the Goths. The author of the second part of the life in the "Liber pontificalis" is favourably inclined to Silverius. The pontificate of this pope belongs to an unsettled, disorderly period and he himself fell a victim to the intrigues of the Byzantine Court.