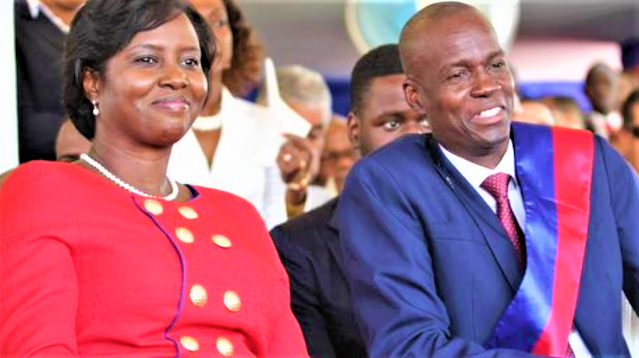 The president of Haiti, 53-year-old, Jovenel Moïse was fatally shot and his wife was injured when attackers entered their home on Wednesday, July 6, 2021. First Lady Martine Moïse has been flown to Florida is receiving treatment.
In telegram addressed to the Apostolic Nuncio in Haiti, from Pope Francis via Cardinal Parolin, "On hearing the news of the heinous assassination of His Excellency Mr Jovenel Moïse, President of Haiti, His Holiness Pope Francis offers his condolences to the Haitian people and to his wife, who was also seriously wounded, whose life he commends to God. Praying to the Father of Mercy for the repose of the soul of the deceased, the Holy Father expresses his sadness and condemns all forms of violence as a means of resolving crises and conflicts. He wishes for the dear Haitian people a future of fraternal harmony, solidarity and prosperity. As a pledge of comfort he invokes the abundance of divine blessings on Haiti and all its inhabitants.”
The telegram was signed by Vatican Secretary of State, Cardinal Pietro Parolin for the Pope.
Four assassins allegedly killed Haiti`s President and critically wounded his wife at their home in the Capital Port Au Prince. They have themselves been killed by Police, and two more have been arrested.
The gunmen falsely claimed to be Drugs Enforcement Agents.
Prime Minister Claude Joseph,  declared a State of Siege,  described the gunmen as mercenaries. President Moise started his term in 2017. He should have stood down in February. The United Nations called for free and fair elections,

"Whatever it is, life must be respected from conception to natural death. That is why we strongly condemn the assassination of President Jovenel Moïse. As missionaries we appeal to the unity of political forces, to find a way out of the serious crisis that the country is experiencing, because the country has fallen to a level that cannot fall lower", these are the words of Father Renold Antoine CSsR, a Redemptorist missionary, to Fides after the assassination of the president of Haiti, Jovenel Moïse. "This news comes at a delicate moment in national history - underlines the missionary - in which the political and economic crisis, added to the coronavirus pandemic, and amid a sharp increase in gang violence, are shaking the country".

According to information released by the local press, President Moïse was shot dead around 1:00 am yesterday by a Spanish-speaking armed group. No further details on the killers or any claims were provided. Acting Prime Minister Claude Joseph, in an official statement issued a few hours later, broke the news, adding that he was taking on the task of leading the country. In the attack, according to Joseph's statement, the president's wife was injured and hospitalized. The Episcopal Conference of Haiti issued a statement, also sent to Agenzia Fides, condemning the fact, which reads: "Violence can only generate violence and leads to hatred. This attitude will never help our country to get out of this political impasse that can only be resolved through dialogue, consensus, the spirit of commitment for the best interest of the nation, for the common good of the country". "The Episcopal Conference invites all the sons and daughters of the country to overcome their personal pride and group interests to seek together, around a table, the Haitian solution long awaited by the population, dictated by love for Haiti and for our values as a people". The Bishops conclude with a strong appeal: "Lay down your arms! Choose life! Choose fraternal coexistence in the interest of all and in the interest of Haiti!".

The administration of President Moïse recorded several frictions with the Bishops. In 2019 the Bishops denounced violence, intimidation and misery, commenting on the situation in the country after the population took to the streets to demonstrate against the government of President Moïse. In recent months, opposition leaders had called for Moise's resignation, arguing that his term legally ended in February 2021, but he insisted on changing the constitution with a referendum in order to remain President. Last month, the Bishops had published a statement on the matter: "it is not the time to change the Constitution in the midst of a social and political crisis, in these difficult times for our people" (see Fides, 2/6/2021). In recent times, Haiti is experiencing a further worsening of the political, economic and social destabilization that has plagued it for years. Violence has reached worrying levels, kidnappings (including religious ones) are on the agenda, inflation is on the rise, food and fuel are scarce in a country where 60 percent of the population earns less than $ 2 a day. In addition, Haiti has never recovered from the devastating 2010 earthquake and Hurricane Matthew, which hit it in 2016. The coronavirus pandemic has further aggravated the situation. In 2019 there were violent popular protests and clashes in which dozens of people died. A change was hoped for with the general elections that should have been held at the end of this year, but the murder of Moïse opens up an unpredictable scenario. (CE) (Edited from Vatican.va and Agenzia Fides, 8/7/2021)