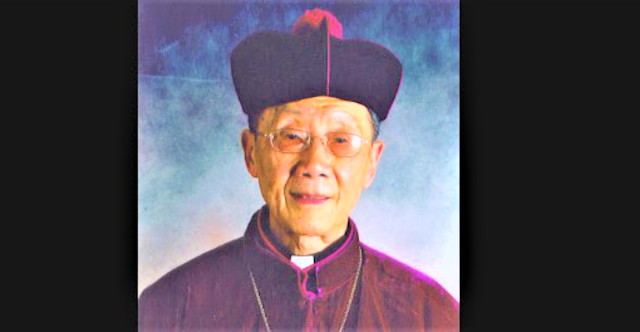 Hangzhou’s 'official' bishop Cao Xiangde dies
by Sergio Ticozzi
The bishop passed away yesterday at the age of 93. Ordained bishop in 2000 after he was "democratically" elected despite the Vatican's opposition. In 2008 the Holy See granted him legitimacy but without jurisdiction over the diocese.
Hong Kong (AsiaNews) – Matthew Cao Xiangde, official bishop of Hangzhou (Zhejiang province), died yesterday at the age of 93.
He was one of the bishops appointed in 2000 without papal mandate during the crisis in relations between Beijing and the Vatican.
In September 2004, the prelate asked the Holy See to be legitimated; this was granted on 8 June 2008 but without jurisdiction.
Born on 16 September 1927 in Tongzhen, ​​Pudong New Area, in the municipality of Shanghai, he entered the Wensheng Regional Seminary in Jiaxing, run by the Lazarists, in 1950 and moved to the Beijing seminary two years later.
In 1954, amid the storm that engulfed the Chinese Church with Mao's rise to power, he continued his studies and pastoral practice in Haimen, Zhejiang, but he was ordained only in November 1985 by Bishop Jin Lu-xian of Shanghai, after the Cultural Revolution which put him through various harsh experiences.
Once he became a priest, he was able to perform his priestly ministry in Hangzhou cathedral (one of China’s oldest churches, built in 1661 by the great Jesuit missionary Martino Martini who died and is buried here) and in the parishes of Xiaoshan and Jinhua.
On 25 June 2000 he was “democratically” elected and ordained bishop by Matthew Yu Cheng-cai, the official bishop of Haimen, despite the Holy See's exhortation not to proceed.
Bishop Cao Xiangde was a member of the Chinese Patriotic Catholic Association (CPCA) and the so-called Chinese Bishops' Conference, two bodies controlled by the Chinese Communist Party through which the authorities exercise control over Catholic communities.
He led the CPCA, later becoming its honorary president, as well as the Ecclesiastical Commission of Zhejiang province, and chaired the city's Political Consultative Conference.
He had recently retired to a hospice in Wuyunshan due to poor health, but on 25 June 2020 he was able to mark the 20th anniversary of his episcopate together with the clergy and the authorities.
The official obituary released by the party-controlled bodies announcing his death states: “For all his life Bishop Cao always loved the fatherland and the Church, supporting the principles of Church autonomy, independence and self-administration, serving it with faithfulness and zeal in a humble and modest way. He fulfilled his duties with responsibility and served society.”
His funeral is set for next Monday with a limited number of participants due to the epidemic.
Full Text Release: Asia News IT