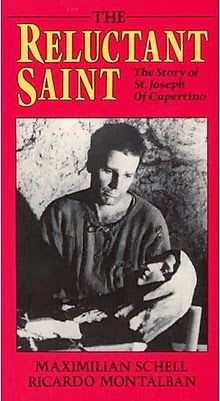 The Reluctant Saint (1962) 105 min - Comedy | Drama - 2 November 1962 (West Germany)
Saint Joseph of Cupertino was born Giuseppe Maria Desa in Copertino, Puglia, Kingdom of Naples. (June 17, 1603 — September 18, 1663) Joseph of Cupertino, a simple young man thought by many in his village to be an idiot, is pressured to enter a monastery. He does so, and surprises everyone by passing the entrance exam to study for the priesthood. But this is only the first of many surprises from the man who would become Saint Joseph Cupertino. (Review by Internet IMDB)
Director: Edward Dmytryk
Writers: John Fante, Joseph Petracca.
Stars: Maximilian Schell, Ricardo Montalban, Lea Padovani
RIP Maximilian Schell