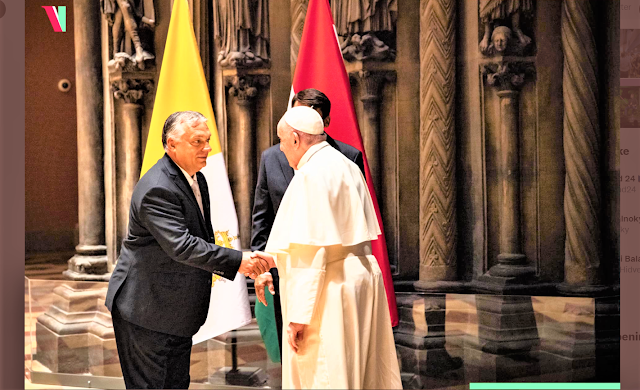 At the beginning of Pope Francis’ one-day visit to Budapest, Hungary, he went to Museum of Fine Arts for a meeting with Hungarian President János Áder, Prime Minister Viktor Orbán, and Deputy Prime Minister Zsolt Semjén. On Facebook, Orbán says he asked the Pope to not let Christianity die out in Hungary. Orbán presented Pope Francis a letter that King Béla IV wrote for Pope Innocent IV in 1250. The King warned of the looming threat of the Tatar invasion and called for the unity of Europe. (Twitter @BalazsOrban_HU)

SEE ALSO: FULL TEXT Homily of Pope Francis "...let us allow our encounter with Jesus in the Eucharist to transform us..."  at the Eucharistic Congress

A statement from the Holy See Press Office said the Pope was welcomed to Hungary by the heads of state and government for a “cordial” meeting in the Romanic Hall of the Museum. The men posed for an official photo before holding a 15-minute private meeting. The Pope and Hungary’s civil leaders discussed the “role of the Church in the country, the commitment to the protection of the environment, and the protection and promotion of the family.” ( FULL Video at bottom)
The Pope was accompanied to the meeting by Cardinal Secretary of State Pietro Parolin and Archbishop Paul Richard Gallagher, Secretary for Relations with States. Afterwards, Pope Francis met separately with the Bishops of Hungary in the Renaissance Hall of the Museum. As part of his official welcome to Hungary, the Pope gifted President Áder with a mosaic depicting the “Papal Blessing in St. Peter’s Square”. The mosaic reproduces a painting by Ippolito Caffi executed in the mid-1800s and now preserved in the Museum of Rome.
Sources: Vatican News, Rome Reports and Twitter @BalazsOrban_HU