Pope Francis Meets with President of South Korea His Excellency Mr. Moon Jae-in at the Vatican 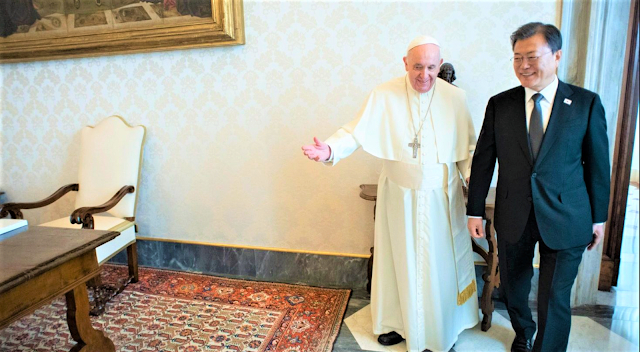 Today, Friday 29 October 2021, in the Vatican Apostolic Palace, the Holy Father Francis received in audience His Excellency Mr. Moon Jae-in, President of the Republic of Korea, who subsequently met with His Eminence Cardinal Secretary of State Pietro Parolin, accompanied by His Excellency Archbishop Paul Richard Gallagher, Secretary for Relations with States.

During the cordial discussions, appreciation was expressed for the good bilateral relations between the States and for the positive contribution the Catholic Church offers to society, evoking particular diligence in the promotion of dialogue and reconciliation between Koreans. In this regard, hopes were shared that joint effort and good will may favour peace and development in the Korean peninsula, supported by solidarity and by fraternity.

The talks then allowed an exchange of views on some themes regarding current regional affairs and humanitarian issues.

According to the Korean Office of the President Twitter Page Pope Francis  said if he received an invitation, he would gladly visit the North for the sake of helping Koreans and the cause of peace. He went on to say that South and North Koreans are brothers who speak the same language and that he would willingly go.

At the meeting held in the Apostolic Palace, President Moon said, “If Your Holiness has the opportunity and pays a visit to North Korea, it will build momentum for peace on the Korean Peninsula." pic.twitter.com/an8Eb7Kjv4