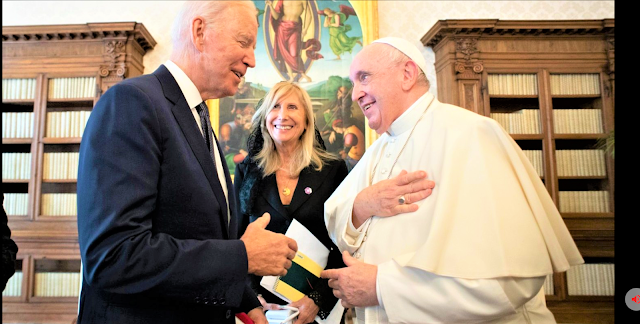 According to Vatican News Pope Francis and US President Joe Biden, had a 75-minute meeting on climate, Covid, migrants and freedom of conscience on Friday, October 29, 2021.
The US leader, accompanied by his wife Jill, met the Pope for the first time in the Vatican as president. They had met previously when Joe Biden was Vice President. A long dialogue behind closed doors in the Apostolic Library occurred on the common commitment to the fight against the pandemic and the protection of the planet reaffirmed, with special attention to international events in the light of the G20.

It was an honor to meet with Pope Francis again at the Vatican today. I thanked His Holiness for his advocacy for the world’s poor and those suffering from hunger, conflict, and persecution, and lauded his leadership in fighting the climate crisis and ending the pandemic. pic.twitter.com/PGF5axSK4X

At 11.59 am the limousine with the seal of the president of the United States stopped under the entrance of the Apostolic Palace, in the courtyard of San Damaso, where the American flag had been hoisted. President Joe Biden, who arrived in Italy overnight to participate in the G20 in Rome, arrived at the Vatican for an audience with Francis. It is the first meeting in the role of president, in the past Biden had already greeted the Pope three times.
The long presidential procession, which started from Villa Taverna, the president's residence in Rome, was made up of over fifty cars, including armored vehicles and SUVs. Opened by an escort of ten motorcycles and the gazelles of the Italian State Police, while a helicopter guarded the area from above, it traveled along Via della Conciliazione following the route previously sealed by the police. After the appointment at the Vatican, Biden is expected at the Quirinale for the meeting with the Italian President Sergio Mattarella and Prime Minister Mario Draghi.
Biden waited for a few seconds in the car: at the last toll of the bell at 12 the car door was opened from where he got out with his wife Jill, in a dark blue dress and with a black veil on his head. Both were welcomed by the regent of the Papal Household, Monsignor Leonardo Sapienza. "Thank you very much, it's nice to be back," said the head of the White House, also joking with some gentlemen of His Holiness, present for the official welcome.
The president was accompanied to the Sala del Tronetto, where the first greeting with the Pope took place. Francis then moved with the president to the Apostolic Library at 12.10 where, one in front of the other at the desk, they started the confidential interview, concluded shortly after 13.25. A dialogue therefore lasting about 75 minutes, probably the longest to date between a Pope and a US president, well beyond what happened in 2014 in the private meeting with the then President Barack Obama, which lasted 50 minutes.
Commitment to climate, human rights and religious freedom
"During the cordial talks - informs a brief note from the Vatican Press Office - we focused on the common commitment to the protection and care of the planet, the health situation and the fight against the Covid-19 pandemic, as well as the issue of refugees and assistance to migrants. Reference was also made to the protection of human rights, including the right to freedom of religion and conscience ". Finally, the note continues, "the talks allowed an exchange of views on some issues of international current affairs, also in the context of the upcoming G20 summit in Rome, and the promotion of world peace through political negotiations".
A White House statement, released shortly after Biden's departure from the Vatican, reports that the US president "thanked His Holiness for his support for the poor and for those suffering from hunger, war and persecution in the world". Biden "praised Pope Francis' leadership in fighting the climate crisis, as well as his commitment to guaranteeing the end of the pandemic for all, through the sharing of vaccines and a fair global economic recovery".
The audience concluded with the traditional exchange of gifts and greetings to the ten-member delegation, including Secretary of State Antony Blinken and Casa Blanca Security Advisor Jake Sullivan. Then Biden met the Cardinal Secretary of State, Pietro Parolin, and the Secretary for Relations with States, Monsignor Paul Richard Gallagher.
Edited from Vatican News
Catholic News Service Commented on the Gift Exchange:
Pope Francis gave Biden a large painted ceramic tile of a pilgrim walking along Rome’s Tiber River and pointing to St. Peter’s Basilica in the distance. It and its border of shell designs symbolize “protection from adversity” during one’s spiritual growth and the hope of reaching a deeper and more fulfilling purpose at the end of this spiritual journey, according to an explanation of the artistic piece.
Pope Francis also gave the president a signed copy of his message for World Day of Peace 2021, a collection of his major documents, including his document on human fraternity, and the book, “Why Are You Afraid? Have You No Faith? The World Facing the Pandemic.” The book contains photographs and homilies, messages and prayers the pope delivered during the pandemic, emphasizing the importance of love, hope, solidarity and the common good.
Biden presented Pope Francis with a framed, handwoven “fiddleback” chasuble that had been made by Gamarellis, the famous Rome tailor shop, in 1930, for Jesuits in the United States. The White House was also making a donation of winter clothing to charities in the name of Pope Francis to commemorate the World Day of the Poor Nov. 14. Biden also gave the pope a copy of his memoir, “Promise Me, Dad: A Year of Hope, Hardship, and Purpose,” about losing his firstborn son, Beau Biden, to brain cancer at the age of 46 and a presidential command coin inscribed with the unit of his late son, who had been deployed to Iraq in 2008. Biden explained the reason for the coin to the pope, “I’m not sure this is appropriate, but there’s a tradition in America that the president has what is called a command coin that he gives to warriors and leaders and you are the most significant warrior for peace I’ve ever met.” “And with your permission, I’d like to give you this coin,” he said, saying, “I know my son would want me to give this to you.” “The tradition — I’m only kidding about this — next time I see you, if you don’t have it, you have to buy the drinks,” Biden said, adding, however, “I’m the only Irishman you’ve ever met who’s never had a drink.”
(Excerpt from CNS)