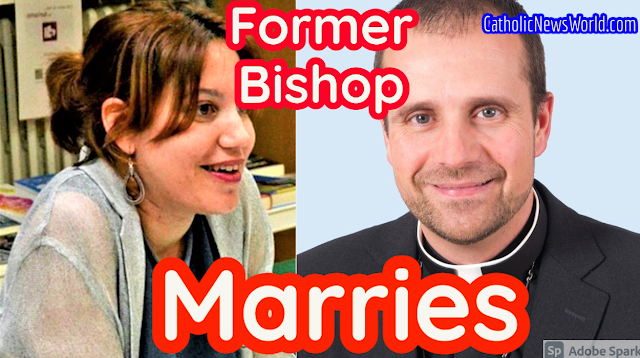 Xavier Novell, former bishop emeritus of Solsona, in Spain, and the writer Sílvia Caballol, married civilly. The couple got married on Monday, November 22, 2021, in the Súria justice of the peace (Barcelona).  Xavier Novell, at the age of 41, in 2010, became the youngest bishop in Spain, is now 52 years old, while Caballol was born in 1983 in Súria. Caballol has a degree in psychology from the Autonomous University of Barcelona (UAB), university where she has also completed a postgraduate degree in Health Psychology.

After resigning as bishop in August, Novell married his mistress in a civil marriage - Novell is not yet laicized.

The former Bishop of Solsona, in Spain, Xavier Novell, married his lover under civil law. According to canon law, Novell has committed a canonical offense; because he had not yet received laicization from the Holy See. It was on August 23, that Novell officially resigned from his position as Bishop of Solsona (see press release below). According to media reports, the bishop's mistress is expecting twins. The psychologist has two children from her first husband, a Moroccan Muslim. The woman is divorced from her first husband, she has published erotic and satanic novels: ‘Amnesia Trilogy’ and ‘The Hell in Gabriel’s Lust’. The Diocese of Solsona is currently headed by an administrator.

PRESS RELEASE OF THE DIOCESE OF SOLSONA

Today, the Holy See has made public the simpliciter acceptance by the Holy Father of the renunciation of the pastoral government of the diocese of Solsona that our Bishop, HE Mons. Xavier Novell i Gomà, has freely presented for strictly personal reasons, in accordance with what is contemplated in canon 401 §2 of the Code of Canon Law.

Mons. Novell made the decision after a period of reflection, discernment and prayer, at the end of which he spontaneously presented to the Holy Father his own situation and his resignation from the pastoral government of the diocese of Solsona.

At the same time, the Holy Father has appointed HE Mons. Roman Casanova i Casanova, Bishop of Vic, Apostolic Administrator of Solsona during the vacant see. The diocesan community of Solsona welcomes this difficult moment with the trust placed in God, Supreme Shepherd of the Church, and raises his prayers for the Holy Father, for Mons. Novell and by the Apostolic Administrator.