Saint November 23 : St. Clement I a Pope - Patron of Boatmen, Sailors, Sick children, Stonecutters and Author of Letter to the Church of Corinth 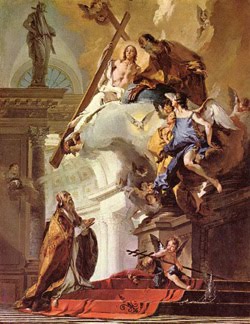 St. Clement I a POPE
Born: Rome, Italy
Died: 101
Patron of: boatmen, marble workers, mariners, sailors, sick children, stonecutters, watermen
Saint Clement I, byname Clement Of Rome, Latin Clemens Romanus   (born, Rome—died 1st century ad, Rome; feast day November 23), first Apostolic Father, pope from 88 to 97, or from 92 to 101, supposed third successor of St. Peter. According to the early Christian writer Tertullian, he was consecrated by Peter. Bishop St. Irenaeus of Lyon lists him as a contemporary of the Apostles and witness of their preaching. Bishop Eusebius of Caesarea dates his pontificate from 92 to 101. His martyrdom is legendary, and he has been hypothetically identified with the Clement mentioned in Phil. 4:3. His attribute is an anchor, to which he was tied and cast into the sea, according to spurious tales.
The authorship of the Letter to the Church of Corinth (I Clement), the most important 1st-century document other than the New Testament, has been traditionally ascribed to him. Still extant, it was written to settle a controversy among the Corinthians against their church leaders and reveals that Clement considered himself empowered to intervene (the first such action known) in another community’s affairs. His Letter achieved almost canonical status and was regarded as Scripture by many 3rd- and 4th-century Christians.
Numerous Clementine writings—those that at various times were added to the first Letter—show the high regard for Clement in the early church. He is credited with transmitting to the church theOrdinances of the Holy Apostles Through Clement (Apostolic Constitutions), which, reputedly drafted by the Apostles, is the largest collection of early Christian ecclesiastical law; the constitutions are now believed, however, to have been written in Syria c. 380. W.K. Lowther Clarke’s edition of The First Epistle of Clement to the Corinthians was published in 1937. Text from Britannica